I expect to hear some booing in Oakland, and no, they won't mean "Bruce". 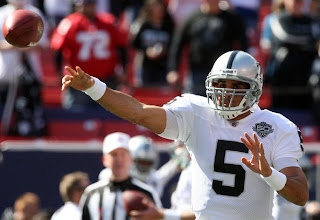 An amazing two touchdowns in nine games has finally lead the Raiders to bench Russel in favor of Bruce Gradkowski. Some may think that it's about time, but I beg to differ. Do you remember this guy? He hasn't thrown a touchdown in three years, but has thrown 11 interceptions. Last time he started was for Cleveland where he completed only 8 out of 16 passes for 18 yards AND two interceptions. Did he win the job last Sunday? Here are the ending plays for his four possessions last week: Incomplete pass, Int, Sack, Int. Russell has played aweful, but I think Gradkowski should prove even worse this week. The Raiders would be better off with Kitna. There, I said it.
Posted by Muumuuman at 2:44 PM