In this lull before the 2009 NFL season becomes the source of our legends, it is appropriate to look back and give thanks for a great Superbowl 43. A previous post explains how the five-time champion Steelers and never-been Cardinals arrived.

The Steelers got the ball first. Starting on their own 28, they blasted across the field with long passes to WR Ward and TE Miller, landing at Arizona's goal line. They couldn't crack the line so QB Roethlisberger kept the ball around the end and got into the endzone. However, the Cardinals successfully challenged the ruling and the Steelers settled for a short field goal. Five minutes into the opening quarter, the Steelers led 3-0.

The Cardinals got nailed for holding LB Farrior, recovered their own fumble and punted the ball away. The Steelers gouged Arizona's defense with strikes to WR Holmes and TE Miller, who was once again tackled at the one yard line.

Second Quarter
This red zone visit, the Steelers' who-dat RB Gary Russell (2 rushes for -3 yards in the game) smashed in for a TD. Only one minute into the second quarter, the Steelers led 10-0.

Arizona's RB Arrington muffed the kickoff and the Cardinals had to start on their own 17. The towels were twirling most terribly and the game was in danger of becoming a blowout. However, QB Warner moved them down the field with poise. RB James caught passes out of the backfield. Then TE Patrick held LB Farrior and the Cardinals faced a long conversion. 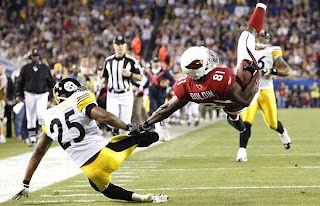 The Steelers brought their safeties in for a kill shot and Warner beat the blitz, connecting with WR Boldin for 45 yards. TE Patrick redeemed himself with a one yard TD catch and the Cardinals fought back to 7-10 with nine minutes left in the half.

The Cardinals defense stiffened and the Steelers punted from their own 32. With good field position, the Cardinals offense imploded in a paroxysm of penalties and timeouts. When Pittsburgh got the ball back, the Arizona defense immediately tipped a pass for an interception by LB Dansby.

At two minutes, the Cardinals had the ball in Steelers territory. WRs Fitzgerald and Boldin chipped them down to the five yard line. The Cardinals took their last timeout with eighteen seconds left. And then NFL defensive player of the year LB Harrison pounced on a pass at the goal line and returned it for a Superbowl-record 100 yards, beating six tackles to score on the last play of the half: the Steelers led 17-7.