NFL training camp begins in a month. Before the previews, prognostications and pith drowns us in excitement for the 2009 season, I thought it would be worthwhile to return to Superbowl XLIII for a final farewell.

With arguably the most exciting 4th quarter in Superbowl history, the Steelers v. Cardinals conflagration has begun to fade from our collective conscious. And so I'd like to bring y'all back to February 2008: no one had heard of swine flu, President Obama had just changed the address on his Netflix account, and people around the country were pulling for the Cardinals.

How They Got There 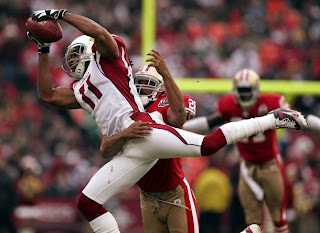 NFC West Champ Arizona Cardinals defeated young upstart Atlanta, buggered Delhomme's Panthers and out-gunned the Eagles to get to the Superbowl. In the regular season the offense ranked 4th in points and yards, and ranked #2 in passing.

The defense was fast and dynamic but prone to penalties and mistakes, ranking 28th in points allowed. While QB Warner had yet another outstanding season, team MVP was WR Larry Fitzgerald. In four playoff games, Fitzgerald posted 546 yards and 7 TDs. 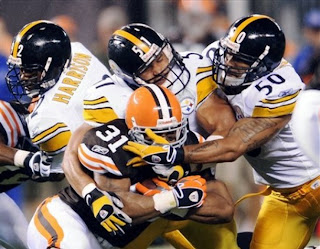 hard-hitting Ravens to get to the Superbowl. In the regular season, the #1 ranked defense in the NFL destroyed opponents throughout the year. They had no weaknesses.

The offense was capable but hardly elite, relying on QB Roethlisberger's arm with RB Wee Willie Parker slowed by injuries.

The Steelers were the #2 seed and were 7 point favorites over the 9-7 Cardinals who were only in the playoffs because their division was so lachrymose. The Steelers had already won five Superbowls. The Cardinals? One playoff win since 1947.

But then, that's why they play the game itself.

Next Post: the game itself.
Posted by Andrew Wice at 10:51 PM

I am so happy to be talking football again.

I know. And I haven't even started the Redfiend hype yet.

Football! I can taste it.