The "Portuguese Piledriver", no that doesn't work...how about the "Portuguese Pistol", nah...anyway Cristiano Ronaldo, 24 year-old soccer phenom is now on his way back to the Iberian peninsula. For a record setting price, $131.5 Million, Manchester United has agreed to ship Ronaldo to Real Madrid. 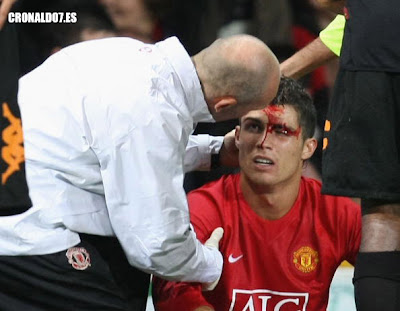 The idea of Ronaldo playing in the midfield with Kaka is very interesting. They both posses the trifecta of offensive skills. They are fast, with impeccable ball control, and they can finish in variety of effective ways (and Kaka is a very good passer, is that a quadfecta?). I assume the Real Madrid leadership was feeling some pressure after Barcelona won the Spanish Primera and the Champions League (not to mention a couple of other titles) this past season. There is also talk that Spanish national striker and current Valencia star David Villa will join the club. That would make perhaps the most formidable attack trio in european football.

Interestingly, Ronaldo leaves one of my least favorite teams in any sport and joins another. It just fits his personality so well.
Posted by Miwacar at 6:46 AM

Four makes a superfecta. And if you read 'offensive' as the opposite of well-mannered, those skills can be hilariously misinterpreted as referring to Greasiano's exploits with the ladies. He can finish in a variety of ways? Absolutely.

Ball control has always been my downfall.