The inevitable separating of ways has finally happened.  Kevin's disappointment aside, it really really, really had to happen.  Once an owner declares that you have his ear no matter what your place in the organization, you've got to go.  Especially when between you and the owner, you've made such decisions as:


1.  Risk draft picks (and lose them) by giving Joe Smith a huge illegal deal.
2.  Trade for Marko Jaric, giving up a first round pick and a ton of money to keep him.
3.  Throw good money after bad attempting to make Troy Hudson a reliable guard who didn't spend his offseason recording awful rap CD's.
4.  Draft Nbudi Ebi, Will Avery, and in the second round chase overrated Big 10 talent year after year (Bracey Wright, Rick Rickert, Marcus Taylor,  etc)
5.  Trading away Brandon Roy, Mario Chalmers and OJ Mayo on draft day (the latter may still work out OK)

I bear a lot of ill will towards McHale's role in completely funking up my NBA franchise of choice (considering #2 are the DC Bullizards, I am kind of stuck with the Wolves).
But I do remember the McHale of old, who provided color commentary on the radio (along with Kevin Harlan) during the early, dark years of the franchise, when Andres Guibert occasionally plodded up and down in a 2/3rd empty Target Center.  I wish that McHale all the best.  He's the one who took a shitty franchise and made it entertaining, and continued that streak through his first couple of years working directly with the franchise.

The other McHale, who took an entertaining franchise and made it shitty, and basically became the living embodiment of the Peter Principle, can go screw. 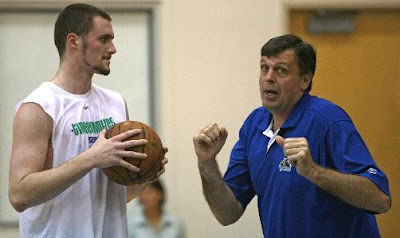 Posted by Big Blue Monkey 2: The Quickening at 1:08 PM

You always say you remember them doing radio games, but I only remember the Kevins doing TV. Regardless, they got me through many a dark day as a Wolves fan. Maybe TNT will give McHale a gig and reunite them. That would be okay.

I hate myself for feeling bad for McHale after reading that article, after all the shit I've talked lo these many years. Damn you, McHale!