There is a dangerous rouge individual on the loose, who was last seen where I live in Boulder, Colorado. His was convicted last year of third degree assault on his girlfriend (see either BBM or another asshole named Andy), and now a warrant has been issued for his arrest. Here is the latest photo the authorities have on this dangerous individual who is roaming the streets, my streets, as I type. WON'T SOMEBODY THINK OF THE CHILDREN!!!! 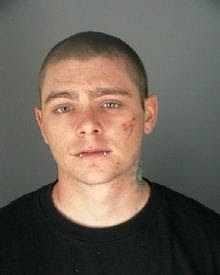 Look at that criminal face - a lost snakelike gaze, lip piercings, facial scars, and a neck tatoo. Wait a second. I know this Boulderite - he's almost a famous as Mork! It's Brian Bonsall! 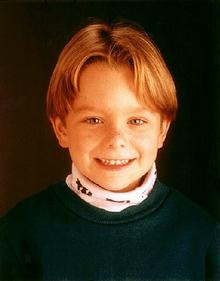 Cute little feather, how could little Andy Keaton have gone so, so wrong....

As pointed out by one of our loyal readers an awol, delinquent, overdosed, arrested, phychotic ex-childhood star is hardly news worthy. Additionally, this is a sporting blog and not ET. Therefore may I submit a modest proposal? Rather than have the courts issue a silly warrant for arrest which frightens no one may I suggest about more of Connell-esk "Most Dangerous Game" warrant? People of Boulder, hunting season is open!

Disclaimer: I've seen and heard street interviews on TV and radio with the general population. J. Swift didn't really think eating the Irish was a good solution. Bonsall has ruined his life enough - I do not support or propose any vigilantly action.
Posted by Muumuuman at 3:51 PM

A former child actor in trouble with the law?

What are the fucking chances of that?

Copyright infringement. I posted about Brian Bonsall, using those same two pictures, somewhere over a year ago. I believe it was in conjunction with a photo of his hardcore band playing in an empty parking lot at 11 AM.

You be pulling my scabs, MMman.

I believe it was one year ago, and BBM posted about it first. You be pulling the scabs Andy. Besides, I thought this was IDYFT/Bonsall update blog.

I believe you mean Bonsall/IDYFT.

I always hated that little fucker. Why do you think I go by "Andrew" now?