Chris Dudley is Running For Governor of Oregon 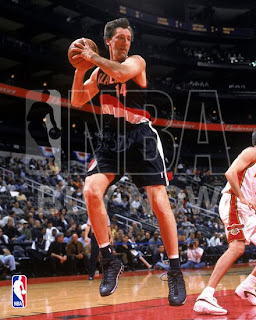 That is simply unfair. Chris Dudley is too beloved in Oregon for his legendary play for the Trailblazers. Clearly, he's going to win the Republican nomination. He has already brought his still talked-about basketball panache and excitement to his platform, trumpeting such new exciting concerns as "cutting spending" and "lowering taxes". It would take a bold insightful court leader like Chris Dudley to bring these sorts of crazy concepts to the Republican mainstream.

But it isn't fair. After he trades his goodwill for his scintillating career on the hardwood, who or what could stop Chris Dudley from further trading on his name to get some new constitutional amendment allowing former NBA'ers to have no term limits in Oregon?

Next thing you know, he becomes their de facto king, and you wake up one day in 2025, and Oregon is no longer a state, but it's own independent nation called the Duchy of Dudley or some such thing.

The people of Oregon can not be trusted to do the right there here. Their love of Chris Dudley is without bounds, and beyond any logical grasp needed to vote rightly in state elections.
Posted by Big Blue Monkey 2: The Quickening at 3:13 PM

Email ThisBlogThis!Share to TwitterShare to FacebookShare to Pinterest
Labels: Chris Dudley Will Be The Warrio King of the Pacific Northwest, NBA, politics

At last the Republicans are embracing the stiff, white and non-athletic demographic.

Dudley will punish tax-and-spend liberals just like he punished the front of the rim taking free throws.

Wice is on target on Dudley's off-targetedness: