That "yay" is only in part for Miami's drubbing of Belacheat's Patriots. Looks like if he doesn't get the other teams plays before hand his team is helpless to adjust to a college football play. What was that, 5 times, 5 touchdowns? Four of them by rushing up the middle? How tricky! Genius my ass.
Speaking of NFL geniuses, it has been reported that MATT MILLEN IS FINANALLY FIRED! 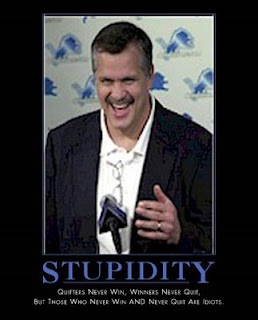 (Thanks to AFK Football for the image)
Hen in a Hat! Hooray! Hooray! Looks like the reign of terror is over. William Clay Ford Sr. has finally come to his senses and fired the leagues worst GM/CEO. So good luck to the next GM, who has to figure out what to do with a defense that averages 208 yards rushing/game, 228 yards passing/game and 38 points allowed/game. Those are some fantastic stats! But wait here's more!

And for you fantasy players, lets make a team of back-ups or players very unlikely to start in any 10 team format from the first 3 Lions games.

I won't go into the details of the scoring, but for the league I'm in 75 points for three weeks would give you 225 points total, which would be just below the league highest of 254 (BBM's score- congrats!).


And if you just started Green Bay in week 2, that is Rodgers, Grant, Jackson, Driver, Jennings, Jordan, Crosby, and Packers D you'd have scored 99 points.   Over the past 3 years that point total would tie for 13th as the highest in any given week.

Hooray Beer!
Posted by Muumuuman at 10:54 AM

Congratulations to fans of Detroit who have weathered a bad storm since Barry Sanders left.

Who's going to be the new GM? I bet Steve "The Cancer" Beurlein is available.

He and Kevin McHale must have made deals with Satan to keep their jobs as long as they did/have.