Just a wee little slack in me trousers

The 2008 season has begun and I couldn't even get my NFC East Preview posted in time. You know it must be a busy time around the headquarters of Badcock International LLC when I don't have time to voice my opinion ...

But let's cut to the cheese, which involved the defending world champs gripping an 11 point lead through a moribund second half.

Here's your game: Laron Landry gets run over. Fred Smoot is now a target and he got worked, 1 INT (out of 3 chances, including a freebie in the endzone) notwithstanding. Jason Taylor is a target in the run game. The Redbeards offense is very obviously a work in progress. Player of the Game is without a doubt Rock Cartwright, whose returns and kick coverage were the very best the Redbeards mustered. I'm beginning to think of him as in the shadow of the great lil' Brian Mitchell. Keep it up, Rock.

Campbell is thinking his way through the offense, rather than just playing. That can only improve with time. His WRs did him some disservice (always a yard short of the first down) but he needs to get on them in the huddle so that it doesn't happen every fucking series.

The lollygagging was absolutely inexcusable. They looked like they haven't practiced their 4 or 2 minute offense yet. Why is Santana Moss running a 3 yard cross when we're down 11 points? Does no one remember the Greatest Four Minutes in Washington History?

If "West Coast Offense" means 3 yard passes in the last two minutes then you can give that shit back to the Japanese. Cooley was underused and it isn't clever that Portis faces 8 or 9 man fronts all the time.

Supplanting RT Jansen is one thing, making tough blocks in a real game proved too tough for second-year RT Heyer. So why did the Redskins run to the right 91% of the time (not an actual statistic, but you get the idea)? 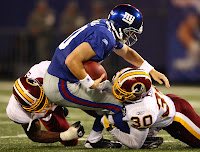 DE Carter, S Landry (as long as he wasn't trying to tackle Brandon Jacobs head-on) and most especially LB Fletcher (pacing the game with 17 tackles, 12 solo) eventually turned in a solid effort and held the Giants to only 16 points (over 28 ppg in the 2007 playoffs). Where the hell was Shawn Springs? Why was Smoot always one-on-one with Burress?

The pass defense looks thin and susceptible again this year, like low-quality soup. Caucasian-American S Doughty is a nice kid with hustle but he'll never be a starting safety. The D Line got their ass kicked in the run game. The Giants physically dominated the Redbeards, and that is a major concern.

But this is what I expected from the early part of the season. What's important is that they keep building, keep improving. Next week we play the talented but enigmatic Saints. I hope to see some drives against a defense that was very poor yesteryear, though they've added personnel.