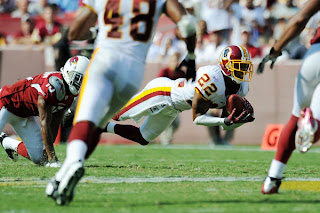 The Washington Redfins beat Arizona thanks to a ball-hungry defense and sharp play from QB Jason Campbell. This game made me long for yesteryear, when we got to play the Cardinals twice. The Redskins enjoy a 46-18 series advantage at home.

I saw improvement in some areas and can sense that the team is starting to believe in each other. As in the Saints game, the Redfins had the edge on O and D but lost ST. And again, 'twas turnovers that made the difference (10 points).

Campbell had a strong game overall, completing 75% of his passes for almost 200 yards and 2 TDs. He also ran twice for first downs on scoring drives. The rush attack hasn't quite found its feet yet, which is surprising. They don't have much push and inside handoffs aren't finding daylight. Portis continues to run hard and is now third on the Redskins all-time TD list. WR Santana Moss is a diamond-plated certified badass. His seventeen-yard score on a screen pass in the 4th quarter was his second game-winning TD in a row. He has TD passes in six games in a row, tying Bobby Mitchell's record.

Cooley had a solid game. Rookie WR D. Thomas is baby-stepping his way into the lineup. His long TD was called back on a bizarre unnecessary roughness penalty during a live play -- the videotape even shows T Heyer waiting for the DT to face him.

The defense is finding the ball, something which has eluded them the past few years. They have forced 6 turnovers in 3 games, tied for 3rd in the NFL. They've only lost one ball (on a punt return) which kings them #1 in turnover ratio (+5). WR Fitzgerald gave them trouble all game and RB James was allowed too many yards. The front four got enough pressure to allow the Redfins to limit blitzing (and potential big plays). It was very jolly to watch QB Warner throw his helmet and scream at his teammates and coaches: what would Jebus do? Hidden stat: the defense hasn't allowed a point in the 4th quarter this season. They only allowed the Cardinals 18 yards in this game.

Our punt & kick coverage forced many holds, which was good. Kick & punt returns generated nothing at all. Rookie P Brooks was inconsistent and once again did a poor job of placing the ball on a botched FG. This unit must improve.

Coach Zorn was again aggressive, playing to win with a play-action pass inside two minutes that sealed the game. The beautiful execution fooled the Cardinals, the camera, myself and all the folks I was watching with.

Trust is being built, scoring drives are starting to feel natural. However, the Redfins travel to explosive 3-0 Dallas next Sunday. They cannot go flat in the second quarter again, or Dallas will jump on top of them. The Redfins 2 minute offense is simply not in place: this must improve. The defense cannot get tired and cannot relent. DE Taylor cannot continue to be a liability versus the run. Special teams is an area of grave concern.

In Other News
In a losing effort, S Troy Polamalu made an incredible one-armed diving INT: here's the clip.

The Vikings got fired up by my ridicule; led by CB Winfield they shut down the Panthers passing game and held them to 10 points.

The victorious Eagles had eight brutal sacks on QB Roethlisberger, but lost RB Westbrook to a sprained ankle. The Eagles also managed to get called for Delay of Game while on defense, which I don't understand.

In overtime, the Bears had stopped the Bucs in on their eight yard line ... until DB Peanut Tillman got into some extracurricular activity and gave the Bucs a first down on a personal foul after the play. The pass-whacky Bucs drove down and scored minutes later. The replay showed a Bucs lineman throw two punches at a Bears player on the ground, but the refs only see the retaliation. Better remember that lesson, Peanut.

Actually, it was nine brutal sacks on Roethlisberger.

And Justin Taylor might be out with an injury versus Dallas.

Every Redfins fan has a moaning feeling in the deep darkness of their bowels, a baleful anxiety that J. Taylor is the next in a long, long, long, long and long series of Big Name free agent bustos. Prove me wrong!