The Mystery of the Mysterious Bellhop 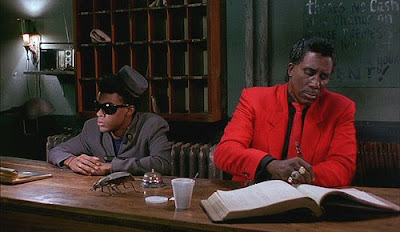 Cincy cleaned house and the players have been snapped up, including Johnson (who ran for 1,300 yards in 2004, 2005 & 2006 but suffered a hamstring in 2007). Detroit brought in Johnson and named him the starter before he signed a contract. Tatum Bell (who ran for one grand in thirteen games in 2006, Denver) was CUT without ceremony, like bargain-basement plastic surgery.

Upon his arrival in Cincy, Johnson met with GM Matt Millen (a-hem). During the greet & meet, a mysterious bellhop whisked away all of Johnson's luggage.

The surveillance cameras solved the Mystery of the Mysterious Bellhop rather quickly.

Tatum Bellhop admitted that he'd taken the bags, thinking they belonged to an unnamed associate. He also admitted to depositing the bags at the home of a one-time female associate.

No charges were filed. No tips were offered.

Thanks to Mystery Train which was not compensated for their contribution.
Posted by Andrew Wice at 10:19 AM