Coming back from a major injury, RB Clinton Portis was averaging six yards per carry before he re-injured himself early in the win over the Titans. 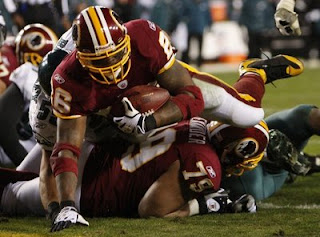 Portis was placed on IR today and there is little chance he will ever play again. He will finish as the second all-time leading rusher in Washington and was the most valuable player on the team during his seven years.

Portis's career rushing total of 9,923 yards and 75 TDs probably won't get him into Canton, unalloyed as it is with many opportunities in the playoffs. Being an outstanding player on a team with a poor record of 47-59 diminished his reputation, rather than enhanced it (see: Archie Manning). As a particularly individualistic player, his unapologetic flamboyance sometimes grated when the team was struggling.

The one constant on my favorite team for the last few years was the shifty, determined running by Clinton Portis. Through humpteen changes in coaches and a treacherously declining offensive line, Portis was a between-the-tackles horse with a tremendous nose for tiny, tender holes. But it wasn't always so.

A Florida native, Portis ran for 104 yards and a TD in Miami's National Championship win his senior year. He was drafted by Denver's Coach Shanahan in the second round. His peerless vision and strong cuts were yet another perfect cog in Shanahan's zone blocking scheme.

Portis particularly excelled at outside-zone "stretch" plays, where he took the ball outside at 3/4 speed and set up his nimble blockers before cutting straight hard upfield through any sudden hole. He ran for at least 1500 yards and 14 TDs both seasons before being traded to Washington in exchange for Champ Bailey (48th career pick on Sunday) and a second round pick.

It was in DC that he became an outstanding blocker, complementing a devastating first punch with tenacious shadowing. Under Coach Gibbs, Portis was asked to become a power back. Running quick traps and dives, Clinton's numbers dropped but as he developed he found success. With a great forward lean and quick wriggle, he avoided major collisions and torpedoed for first downs. A natural finisher, he excelled in the 4th quarter (for example). His 1,516 rushing yards in 2005 are the franchise record, and he achieved it by finishing the season with five consecutive hundred-yard games and got DC to the playoffs. 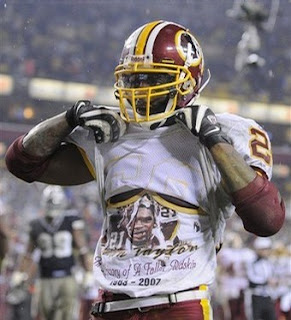 Although Portis had better games, I am inclined to agree with Philip Speake who writes that Clinton's most memorable game was the week 17 win versus Dallas in 2007.

One month after Sean Taylor's murder, Washington was on an impassioned win streak with only the hated Cowboys in the way of a playoff berth. Clinton Portis gained 104 yards and two TDs, breaking tackles and playing with true belly-fire.

After scoring on a 23 yard run which left every Cowboy lying in the grass, Portis lifted his jersey to reveal a Sean Taylor tribute shirt. This remains the only iconic moment of Washington football since the 1992 Superbowl victory.

On a team without much personality, Clinton stood out as a favorite of fan and Dan alike. As the face of the organization, Southside Jerome is less comic than Dan Snyder.

On teams lacking a good, deep offensive line, Portis demonstrated his true value by finding daylight in the narrowest openings. His career average of 4.4 yards per carry is better than that of Emmitt Smith, Tony Dorsett, Marcus Allen and John Riggins; Eric Dickerson and Walter Payton are his equals here. 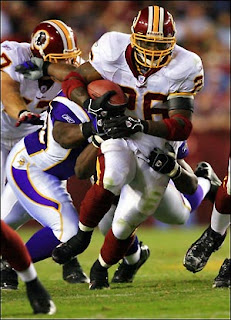 Injuries have claimed his last two seasons and I believe Clinton Portis will walk away from football while he can still walk. Washington will be hunting for young RBs to plug into the system next year, knowing that their success will depend on hoped-for development of the offensive line.

Portis doesn't have a contract for next year and his free agent value will embarrass him. There is a chance that Snyder will work to have his favorite player remain on the team, but Shanahan and Allen feel no such sentimental allegiance. It is truly time for Washington to move on at the RB position. But how long before we see another back of his caliber in the burgundy and gold?

A true franchise tailback, Clinton Portis was quick and fierce and strong. Great footwork, balance and vision were combined with explosive hips to produce the best player in Washington since the Art Monk era. Dependable? Clinton Portis had 325+ carries in 4 of his 7 seasons in DC. 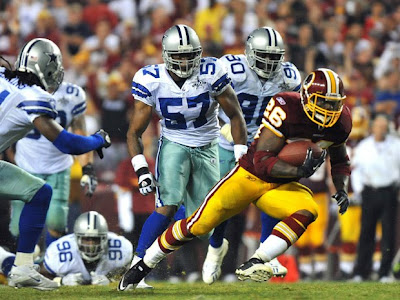 Hail to thee, Clinton Portis.
Posted by Andrew Wice at 11:54 AM

I watched that gif for about five minutes. A great blocking RB means so much more to me than it did even 5 years ago. (please see the hilarity that is Adrian Peterson blocking).

My favorite moment of that is when Chris Samuels looks around like "damn, where did that defender go? Oh shit! How'd he end up on the ground?"