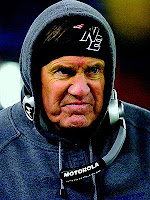 Spygate 2 is what they might call it. The Broncos are being punished for filming the 49ers walkthrough in London back on October 30th. They're claiming that it was just the work of a single employee and the team contacted the league immediately. The 49ers won the game anyway.

The question remains, where did the Broncos get the idea to cheat? From which black heart did these instincts rise? From whence did the disregard of honor invade? Oh yeah, now I remember.
Posted by Andrew Wice at 12:04 PM