Back when I wrote my DC Skins preview, I pointed to this current bye week as a proper time to see if the team was in working order. Short answer: no.

But at 4-4, DC is still alive for the playoffs and are undefeated in their division. Last year they were winless in the NFC East. There is no question that the team is heading up. But they remain dogged by subpar O-line play, the Offense is not clicking, and the Defense gives up a ton of yards. Special Teams are solid, and the emergence of returner Lil' Brandon Banks is a bright spot (although he's injured for 2 weeks). 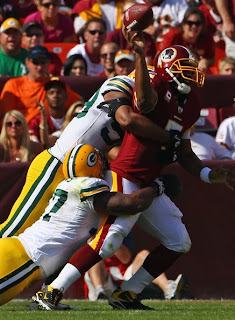 Lacking identity or precision, DC is 31st in 3rd down conversions at a woeful 24%. Running mainly to the right, RB Torain has a solid 4.3 ypr and breaks tackles. But the play-calling is jittery and pass-first: nearly 2:1 pass-to-run ratio. A strange strategy, considering how poor the pass-blocking is: 23 sacks in 8 games, 31st in the league.

McNabb has shown good presence but accuracy is low. Cooley and Moss are on pace for career numbers of receptions, but Moss's yards-per-catch his the lowest ever. Besides 3rd down woes, DC has struggled in the red zone, scoring only 40% (27th in league and lowest for the Skins since it became a stat in 2000).

This offense is clearly the work of Kyle, not Mike Shanahan. Truly committing to the run would spare McNabb's body and eventually raise passing efficiency. That 2:1 pass-to-run ratio is not working. Unless the offense emerges soon, next year DC will be starting a new QB, RBs, WR and praise Gibbs, new OLs. 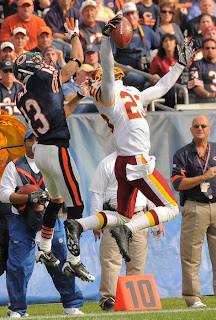 More talented than the offense across the board, this D is a bend-don't-break which feasts on turnovers. For while they're 31st in yards, they only allow a respectable 21.2 points per game. 3rd down defense is 2nd the the NFL, but they yield firsts on all the other downs, including 4th down.

It is apparent that this D is in mid-transition and is struggling in predictable areas. The starting CBs are damn good but coverage otherwise is poor. Lack of discipline vs. the run has allowed huge, rampant gashes.

What this D is able to provide, however, are game-winning turnovers at critical times. At mid-season they've eclipsed their takeaways in three of the last four seasons and are 2nd in the league. LB Orakpo has 7 sacks and gets held as much as anybody in the league; CB DeAngelo Hall leads the league in INTs and has been good in run support as well.

While this unit has playmakers, individual breakdowns are costing games. 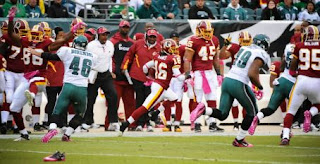 The only unit with continuity, special teams have performed well in most areas. They discovered sensational #16 Lil' Brandon Banks as a returner, only to lose him with an injury of his tiny knee. (photo: n.b. the defender's lost shoe)

Punting has been poor, but kick coverage is 2nd in the league. The kicker is nothing special and misses more game-winners than he makes.

Banks is a dynamic but fragile returner. Without him, the special teams can't influence games. Still, this is the best of the DC Skins' three phases.

Coaching
Mike Shanahan's iron-fisted approach might be just what this team needed, but we may not see dividends until next year. It is likely that there will be more major personnel changes this off-season, and perhaps then Shanahan can install a culture of winning. Shanahan is as personable as a sea snake and his willingness to embarrass players is a turnoff that can only be ameliorated by winning.

Play-calling by the offense, as noted, has been egregious. The defense has responded well to change but hasn't nailed it down yet; coaching must continue. 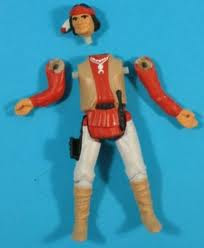 Overall
For a team with so many problems, their tenacity has kept every game close. They have a tendency to play to the level of their competition, which means an entire season of pulling my hair out. This team is certainly improved and the second half of the season holds opportunity.

It's hard to know how good this team could be if they play up to their potential; whether that ever happens remains to be seen. 4-4 is an accurate reflection of the DC Skins: more assembly required.
Posted by Andrew Wice at 1:08 PM