On the one hand, QB Donovan McNabb's performance this season has been criticized (passer rating 76.0). Benching him in the last two minutes of the loss to Detroit has been feasted on by the gluttonous sportsjacks. Coach Shanahan's explanations of the benching was poorly conceived and executed.

Expectations that McNabb would be one-and-done in DC were rampant; I for one considered it a fait accompli. That the offensive line was responsible for the team's ineffectiveness in running and passing didn't ameliorate McNabb's inaccuracy. 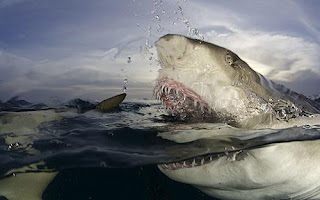 On the day of a major showdown versus the Eagles, McNabb signed a 5 year contract with $40 million guaranteed. The strategy for bringing McNabb in was to have him bridge the retooling of the team and provide cover for grooming a young franchise QB. With this contract, the Skins are confirming that they're convinced McNabb is the man to do it.

Nothing to complain about, I suppose. Hopefully this massive vote of confidence will inspire a great performance at home. If not, there will be blood in the water for the sportsjack frenzy.
Posted by Andrew Wice at 2:04 PM

Email ThisBlogThis!Share to TwitterShare to FacebookShare to Pinterest
Labels: shanahanigans

Holy shit! By the end of that contract, McNabb will be as old as Favre!

And just as effective.

The reports from ProFootballTalk suggest that guaranteed number is pretty much horseshit, and that the real number is closer to $3.5 million. So, that's more like it.

I'm pretty sure that $3.5 million is only if Washington releases him after this year. The guaranteed money is guaranteed once he shows up for camp next year.

Again, I don't think that's so. ESPN bottom line has been reporting that the Skins can cut McNabb at the end of the year with absolutely no cost to them at all.

It's becoming more clear ... DC offered him $40 million in guarantees, not "guaranteed." But if they keep him on the team, they'll pay him over $12 million next year.