As the modern media determines that we enter a Recession (that verb is meant be a double entendre) and major economic institutions crumble like a bobsled made of graham crackers, fear will stalk us. It is the fear of Recession which embiggens the Recession itself.

The stock market is falling, the presidential nominees have shifted the focus of their bullsh -- I mean rhetoric, and people are taking their money out of the banks and converting them to canned food (the currency of the future). 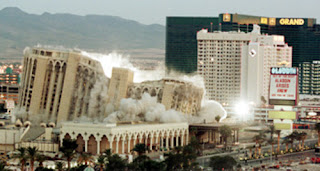 The last refuge of capitalism is the Holy Empire of Las Vegas. Well it was, until Vegas collapsed like Corbin Bernsen's career.

The New England Patriots have destroyed America's faith in itself (again). Not only did they fail to cover the generous 12 point spread, they didn't even win.

Big deal, right? Let's hurry up and hire a coach for the Redskins already, right? Wrong. 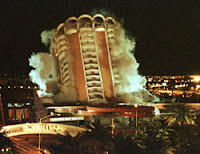 The Holy Empire of Las Vegas lost an unprecedented $2.6 million on the game. The Strip is now experiencing rolling blackouts. Siegfried and Roy have euthanized their tigers. Celine Dion is walking the streets (gross).

Meanwhile, Giants fans are humping the gravy train of success. But at what cost?
Posted by Andrew Wice at 11:14 PM

Email ThisBlogThis!Share to TwitterShare to FacebookShare to Pinterest
Labels: gambling is wrong

Is there egg on my face. All I won by picking the Giants was.... nothing. I want part of that 2.6 million!

MMMan, you did win the esteem of your peers. And a one month moratorium against ragging on the Detroit Lions.

And Big BM has agreed to scrape off your corns with his toothbrush.

I hope that the phrase "scrape off your corns" has a non-literal meaning.

the corns off your soul, muumuuman. You know the ones.

All I got to say is WHO DAT. Next year baby. We got you. Ya heard me. Holl atcha girl. You know what I'm talkin bout. Unless your scared of coarse. Then dont holla.