Why Is the 3-4 Defense So Sticky-Sexy-Sweet?

At this rate, the 3-4 defense will overtake the ol’ 4-3 base defense in a couple seasons. With my favorite team in the process of converting to the 3-4, I have run through denial, anger and I guess now I’m in confusion.

After all, Washington has had solid defense for ten years and we just spent $100 million on the best 1-gap DT in the league. In 2010, my 4-12 team was #1 in the league defending the red zone and 4th down conversions: they were impregnable in short yardage.

Last year, four teams converted to the 3-4 including the Jaguars, who will be desperately switching back to their old 4-3 after a truly wretched season. This year, fourteen teams will have a base 3-4, with three new additions. The Ravens are a special case, because they run a true hybrid of 4-3, 3-4 and 46.

But hey – what the hell are we talking about anyway? 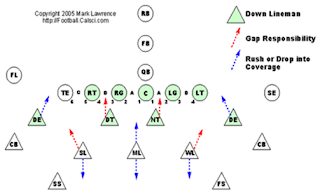 Each defender controls one gap in run defense. DE is the vital position in this defense. They must possess size, strength and speed. They are the primary pass rushers but must also hold their contain on the edge. These kinds of athletes (R. White, D. Manley, J. Peppers) are hard to come by, and getting two is nearly impossible. 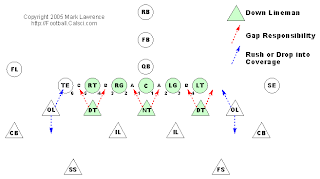 The three down lineman are responsible for two gaps in run defense. This is a hard job, especially for the nose tackle who can be triple-teamed. However, the four linebackers are faster in pursuit and can gang tackle. The OLBs provide better contain and the extra pair of hands at linebacker depth can slow down the popular West Coast offense.

However, the 3-4 has weaknesses against aggressive passing attacks. Speed and quickness can elude LBs in coverage; zones are common in this alignment and can be exploited by good offenses.

The linemen don’t provide a rush, so at least one LB is usually pumped in. This does have the positive benefit of surprise. LBs can be blitzed from rotating zone coverage, which is confusing and safer versus short routes.

Unmovable linemen and outstanding talent at LB can make a 3-4 very dangerous; without that talent, the defense is spread too thin at the point of attack.

The Steelers and Patriots, two exceptional 3-4 teams, have won five championships since the 2001 season. Everybody wants to be like them … except for the Saints, Colts, Giants and Bucs, 4-3 teams who took the other four trophies.

That doesn’t convince me. Perhaps the statistics can offer a clear-cut answer?

2.8 points per game difference may not be inconsequential, but it definitely isn’t sexy. Considering that all the worst defenses in the league ran a 4-3 but would have been equally terrible in a 3-4, there doesn’t seem to be any real edge statistically.

And that makes sense. It isn’t the scheme, alignment or play call that wins or loses. It’s the players: talent, preparation & execution. The team must have good personnel for the scheme, they must coach it well and execute it properly. Which is damn hard to do when eleven other men are attacking you with a scheme of their own. This, by the way, is why I love football.

Washington’s Conversion to the 3-4

Head Coach Mike Shanahan comes from the offensive side (check out this outstanding explanation of “zone blocking”) but he has always had a 4-3 defense. Until his last season in Denver: the conversion to a 3-4 was a disaster and cost him his job.


Defensive Coordinator Jim Haslett was the coordinator in Pittsburgh before they won championships, and that was the last time he’s run a 3-4. As a head coach the last eleven years, he has exclusively run the 4-3.

It took Washington years to finally pull together a dominant 4-3 defensive line. They were heading into the season with only a hole at strongside LB.

By converting to the 3-4, Washington may only keep one of last year’s linemen as a starter (Daniels). Andre Carter and Brian Orakpo, two excellent 4-3 pass-rush & contain DE’s (remember how rare that is), will now play OLB despite their lack of coverage skills. The ILBs are not a good fit for this scheme either, at least on paper.

It sounds like Haslett might be working on a hybrid such as Baltimore’s. He has already hinted that the FS & SS positions are interchangeable and flexible. Perhaps there is a future in that.

But I just don’t understand blowing up a pretty good defense for a trendy scheme. I don’t remember Joe Gibbs going hog-wild for the Run-and-Shoot (which, by the way, won zero championships), or whatever “Hot Topic” was being copied league-wide.

Of course, Coach Shanahan and Coach Haslett know planets more about football than I do. Naturally, I will root for the 3-4 defense as ardently as ever, and hope for the best.

But I just don’t get it.

Unless it’s as simple as the fact that the Dallas Cowboys run a dominant 3-4, and held Washington to six points in two games last year?

That couldn’t be it. Right?

* these good diagrams by Mark Lawrence at Football.Calsci.com
Posted by Andrew Wice at 1:25 AM 2 comments:

Email ThisBlogThis!Share to TwitterShare to FacebookShare to Pinterest
Links to this post
Labels: nfl 2010, why does this keep happening to my favorite team? 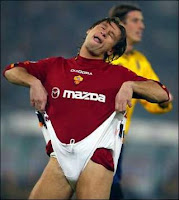 Just to break up the view ... I'm well aware that most of the world is too busy watching the World Cup and blowing on their vulvulvas to think about the NFL. After all, the tournament is heating up while the NFL will be quiet until training camp at the end of July.

My longstanding disdain for soccer is a product of my high school experience. The soccer lads wore polo shirts and played golf, the football players lifted weights and drank beer. Since my hometown is definitely of the polo-shirt-and-golf set, the football team had to struggle for players and equipment while the soccer lads got Gatorade and full attendance.

Since then, I've maintained my hilarious disdain. But sides are being drawn politically, and I'll be damned if I join hands with the far right on any subject like soccer.

I think that it is amusing how elated/crushed soccer fans get. It's not for me, but I won't poop on the world's parade. So I measure my response, and while I hope the U.S. team loses and goes home to blowdry their show-pony hair, I'd love to see a third-world country such as my native (new) Mexico achieve something they can be proud of. Ghana!

But life, for me, begins when the NFL season begins. And at least some of our readers may agree. Therefore, the first prognostications from Professor Badcock's Future-Seeing Factory. The factory now runs exclusively on an oil-seawater amalgam. Drill baby drill!

AFC South is rising: the best in the league, a 4-team division with a beatable schedule. Win %: .594

NFC East is falling: a competitive, 2-team division with a difficult schedule. Win %: .531

NFC North is rising: a competitive 2-team division with a difficult schedule. Win %: .500 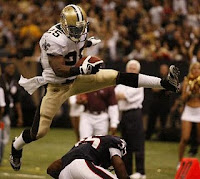 is slowly rising: a competitive 2-team division with a beatable schedule. Win %: .516

NFC West is plummeting: a noncompetitive division with a mixed schedule. Win % .375

There will be another IDYFT Pick’em this year. 2-time champion Jess will defend her title.

Upon your perusal, you may notice that the NFC East and NFC North will clash, which means we might as well have another IDYFT Cup. The Packers took it last time but things have certainly changed since then. The best part, dear reader, is that you don’t have to do a thing.