The preview magazines are out, NFL teams are about to enter training camp and the hopes of a nation are loading up for Superbowl XLV. Badcock Industries is burning heaps of coal to produce prognostications. But a lockout in our nation's most popular sport is seriously looming for 2011.

Like most fans, I've kept my head in the sand. I don't even want to contemplate the possibility that the fall of 2011 will be empty of my only remaining joy.

A consultation (billable hours) with IDYFT's resident legal counsel Barnyard made this confusing labor dispute easier to understand. Essentially, the 32 owners feel that they aren't making enough money, and want the revenue to be distributed closer to 50/50 with players. That the conversation has been characterized as "billionaires versus millionaires" is a disservice to both players and fans. It's a familiar dispute over money between well-leveraged management and exploited workers, albeit for volcanic stakes and on a national stage. 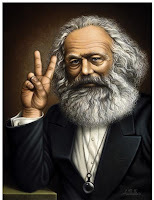 The keystone to the owners' castle is that the TV deal for 2011 will pay them $4.4 billion even if there aren't any games. Add in the $4 billion owners would collectively save by not paying players for the year and there's a tremendous incentive for the owners to give us all the middle finger: players, ancillary industries, TV, advertisers and oh yeah, we fans who pay for all this shit.

The first NFLPA tactical lawsuit has been launched, and if the filing is successful, that heap of TV money would be put in escrow until the football resumes, rather than directly into the owners' pockets. This would eliminate the tremendous incentive to lock out 2011 and pave the way for a new collective bargaining agreement.

Who will control the means of production? Stay tuned, fellow commies!
Posted by Andrew Wice at 10:42 AM