Yes, That's it! It's the Uniforms!

The Detroit Lions have figured out the 50+ year old problem with the team. It's the uniform. I'm sure doing away with the awe inspiring "honolulu blue" will change thier loosing ways. But maybe I should not be so sarcastic given history - I'll start with the obvious.

I know we all remember Tampa Bay's original uniform, which goes to show that wealth and sound decision making do not go hand in hand.

If the logo isn't queer enough for you, his nickname is "Bucco Bruce." I believe the franchise had a hard time focusing on winning because they were distracted by their quest to find the six fingered man:

The uniform was changed in 1997, the team went 10-6 (previous season 6-10), made the play-offs, and defeated Barry Sanders and the Lions (Lost to Green Bay). The team has had numerous playoff appearances and won the Superbowl in 2002. 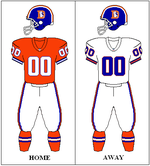 Look! It's Pat Patriot! Hey Pat? Who are you hiking the ball to? Or is this Jim Plunkett working a Historic Williamsburg? 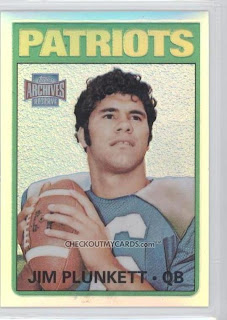 (Oddly enough, Plunkett was a Patriot from 1971-1975) With this awe inspiring uniform the Patriots did manage to find their way into Superbowl XX, which they lost to the shuffling Bears 46-10. Thier new uniform came out in 1993. Since they have made the play-offs 10 out of 16 years and have 3 Superbowl titles.

The Rams, who had one Superbowl appearence in 1979 (loss 31-19) did win a Superbowl in 1999, the last game they wore thier old uniform. Perhaps it was the prospect of getting a new uniform that changed thier ways, or perhaps it was the magic powers of Brenda Warner.

"The Dolts" - that's what I remember of the Colts from my childhood. Next to Tampa they were the laughing stock of the NFL. They changed their helmet, slightly albeit, in 1995 and 2004. Since the change the Colts have 11 play-off appearances for 14 seasons (previous 14 seasons - 1 play-off) and a Superbowl title for the 2006 season. 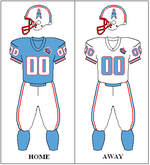 Now what the hell was this? "I think I'll go powder blue, with an oil rig on the brain!" Lovely. They are number two in the record books for the most consecuative road losses with 23 (Lions got to 24 in 2003!). The Oilers experienced both a uniform and name change for 1999 - where they lost in the Superbowl to the Rams - by about 1 yard. Again - they should have won but that Brenda Warner.... I digress. The Titans have made the play-offs 6 out of 10 since the change. In the previous 29 seasons they had only 10 dissapointing appearences. 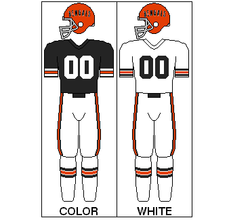 
The first years of the Ravens franchise were rough, perhaps because Frederick E. Bouchat was sueing the team for copyright infringement for stealing his design for their logo. 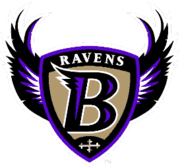 The Ravens changed the logo to the current design in 1999. They won the Superbowl in 2000, and since make the play-offs about 50% of the time. Stealing a logo is bad karma.


...have not changed thier uniform, and have not appeared in a Superbowl. And here's a nice tidbit - the teams old mascot, Brownie Elf!

The team did away with Brownie Elf in 1965. Thier last championship was 1964. Obviously, Brownie liked being a mascot more than he liked making cookies for Keebler, and has cursed the team.

After winning three championships in the 1950's, the Lions debut the leaping lion logo in 1960 nicknamed, I kid you not, "Bubbles"!!

We know what has happened since. Coincidentally enough, the Lions did win their only play-off game in 1991; a year they slightly modified the uniform.

Well, this list just goes on and on, so I'll stop here and make some bold predictions. If the Lions make changes - like giving"Bubbles" some balls, maybe some eyes to see with, or get rid of him all together - I will guarantee a Superbowl appearance within 4 years. MARK MY WORDS!

Thanks to the all knowing Wikipedia for the majority of the information presented here.
Posted by Muumuuman at 11:03 AM

Despite a general lack of investigative rigor, specious reasoning and hyperbole, I am convinced.

If the Lions remake their uniforms, I think they'll be beating the new-look Dolphins in the Superbowl within 4 years.

I also have a rock that keeps Lions away. You don't see any Lions here do you?

Bucky Bruce wants to know who you callin' an ass pirate?