NFL teams are about to enter training camp, a benchmark along the road to prime number glory: Superbowl XLIII (43). This will be the last prime number Superbowl until 2012, by which time the Bears might bring in a QB to finally replace Gross Rexman.* 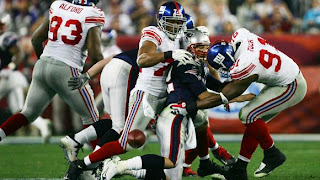 The 2007 season crowned the NY Giants . With their wild-eyed and ravenous pass rush, punishing run game and surprisingly fine QB play down the stretch, they proved that a team full of bellyfire is always capable of beating the heavily-favored Team(s) of Destiny. That the Giants did it all on the road from the wildcard slot deserves acclaim: the hard way, shooting down the Bucs (feh), Dallas (whoa), the Pack (in late January) and the Patriots (no fucking way!). The game I love comes down to making tackles and making blocks. The Giants did it better than anyone when it mattered most, and they are your defending champions.

Professor Badcock has been retooling his prognosticator, and has generously agreed to share the results of its first test drive. With the understanding that this is only a “First Glance” at the upcoming season, let us tally the data with the Tally-Taffy-Twistermatix. Mmm, mechanically-pulled taffy. 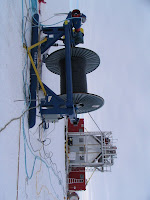 At first glance, the 'Napolis Colts look to be the best in the league. They return 20 of 22 starters, Dominic Rhodes returns from L’inferno (oops, I mean Oakland – hope he washes all the poopstink off him), best continuity in the modern era and a small, fast defense that gave up the fewest points in the league. The AFC South is stacked and the Colts are thin with reinforcements on some units, but the GLAND proclaims that at first glance, the Colts will be 2009 champions. Of course this is without the giant licorice data which generates so much heat that the Giant Licorice Amalgamatron Numbers Differientiator had to be built on the side of an Antarctic iceberg. 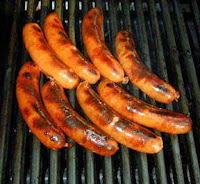 Winner of the 2007 IDYFT Cup and dominant in a terrible division, the ol’ gunslinger flung his last interception in OT at home in January. Many commentators are engaging in a paradox: they proclaim the inimitable Favre as the best ever and irreplaceable, and then predict the Packers will be just as good with an untested and unproven QB. Buh?

They are a young team, and the old salty Cap’n isn’t manning the helm. They were not an impressive running team, and it is hard to believe they’ll again rank #2 in passing offense to offset this lack. The defense boasts a very good D Line with a solid seven behind them. The Packers will take a step back and the rest of the NFC North has taken a half-step forward. They will contend for the Division title but at first glance the Pack are an 8-8 team. 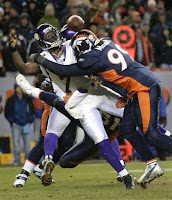 I agree with Childress’s emphasis on running the ball and stopping the run. They’ve been doing both very well (#1 run defense in the NFL two years in a row, #1 rushing offense 2007), yet wins have eluded them. That is because their passing has been among the very worst in the NFL, since Baldy Mustache took over. Jared Allen is a good pass rusher but he’s an idiot. He did give up drinking, but beer kills brain cells? That’s unpossible.

T. Jackson won 8 of 12 starts but battled injuries and turned the ball over far too often. 6.5 yards per pass is too low; excellent WR Bernard Berrian should raise that number. Their secondary is thin and gray and gave up heaps of yards in big plays for the second year in a row (32nd vs. pass in 2008, tied for 31st in 2007). If the Vikings get behind they won’t be able to come back. That’ll be trouble against the Colts and Saints but the rest of their schedule is low-wattage. They can challenge for the Division title. Week 1 is at Green Bay and that game could be decisive in the final standings. At first glance, the Vikings could win some games but their glaring deficiencies will keep them out of the playoffs. Dr. Z has given them the kiss of death by picking them to win it all.

Lions
The only team in the dreadful NFC North that can’t challenge for the Fudgie Division title. They keep firing coordinators, rebuilding, re-assessing … and still suck balls. Remember Kitna’s 10-win prediction? How about this prediction: Kitna will never sniff a Superbowl. The Lions were (yet again) 31st in rushing, worst in yards allowed and points allowed. Their 6-2 start was bogus yet their 7-win season was nonetheless the best since 2000’s whopping 9-7 finish (they missed the playoffs). They have averaged about 4 wins per season since then.

Having no offensive linemen but lots of thoroughbred WRs is like a flashed-up riding mower with some spinners. Perhaps they’ll be able to turn it around in a couple years: they drafted a RT in the first round and he’ll become an immediate starter. At first glance, the owner’s incredible patience with his GM and coach will wear out before the entire line can be rebuilt. Enjoy your Fudgefest, Detroit fans.


Redskins
Hall of Fame Coach Joe Gibbs took the Redskins to the playoffs in two of the last three years, a feat the Redskins haven’t accomplished since the 1992. He hands the keys to Jim Zorn, who is not qualified on paper to be a head coach in the NFL. Many commentators are attributing the hire to owner Daniel Snyder’s newfound “patience.” Nonsense. It was panic. No legitimate candidate wanted to work for the Schneider, so recently-hired O. coordinator Jim Zorn was kicked upstairs. Zorn, by the way, has never been a coordinator at any level – nor has he been a head coach.

That being acknowledged, 2008 doesn’t look as bad as other analyst/therapists are predicting. The running game and defense will remain unchanged, and should remain in the neighborhood of the top ten in the NFL. Equally important, the blocking schemes remain the same. So the main challenge with the new coach falls, yet again, on the broad shoulders of QB Jason Campbell. Campbell’s development has been slowed by having to learn a completely new offense every year. However, he was running a similar offense to Zorn’s Holmgren-inspired West Coast passing game when he led his Auburn Tigers to an undefeated season. He is a winner. The Redskins lost their entire offensive line last year and still made the playoffs; a healthy year from this solid group is the biggest need the Redskins have. They have very good personnel at the skill positions, adding two big WRs in the draft. 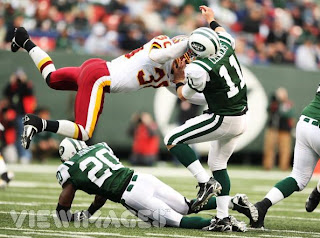 The defense is aggressive and hard-hitting, but the back seven is thin for backups. DE Andre Carter looks poised for a breakout season, augmented by a young corps of DTs. LB and DB has quality starters if everyone recovers from offseason surgeries. S Laron Landry will be an All-Pro if he learns to avoid personal fouls. The return and cover teams are good, but the K and P positions are only average at best. At first glance, the Redskins have too many question marks to get off to a fast start and will need another year in Zorn’s system to be competitive in a cruel division. Let’s hope that Zorn gets another year.


* From Pro Football Weekly’s 2006 Preview: “Members of the front office remain optimistic that a full season with Rex Grossman at quarterback, even though he has had only one game with multiple TD passes in his career…”

From Street & Smith’s 2007 Preview: “If Grossman doesn’t start out awfully fast, there will be pressure to at least give Griese a shot.”

From PFW’s 2007 Preview: “His maturation – specifically taking better care of the football and finding comfort in a collapsing pocket – will determine if he stays on the field ahead of Brian Griese.”

In 2007, Professor Badcock chimed in, “And there is no excuse for another year of Gross Rexman”.

Here we are, ready for the 2008 season, and the poopstink surround Grossman sounds strangely familiar (Sporting News 2008): “There is no reason why the Bears cannot return to playoff form, if Grossman does not self-destruct. Yes, that’s a big ‘if’ but the Bears will not ask Grossman to carry the offense ... the quarterback play is shaky.”

I think the Lions should pursue Rex.

Hell no, the Lions need a winner taking the snap.

I hear Scott Mitchell is available.