"Gurning contests are a rural English tradition and were once common at travelling sideshows, fairs and freak shows. They are still held regularly in some villages, and the contestants traditionally frame their faces through a horse collar - known as 'gurnin' through a braffin'. The World Gurning Championship is held annually in Egremont, Cumbria as one part of the Egremont Crab Apple Fair. Those with the greatest gurn capabilities are often those with no teeth, as this provides greater room to move the jaw further up. In some cases the elderly or otherwise toothless can be capable of spectacular gurns covering the entire nose."

And yes, here is the Queen of friggen England with the 2008 World Gurning Champion: 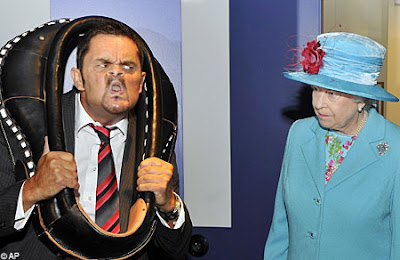 God save the Queen.
Posted by Muumuuman at 12:12 PM