A rite of passage, a ritual that all newcomers to a group have to go through to become a member. Sucking the warrior. The Hamar "Cattle Jump" where you jump on and run over a line of cattle four times. If you fall, you can never become a man. And let's not forget hazings with spankings, drinking contests, etc.
Today's news includes a story that someone has completed their rite of passage. Javon Walker was found beaten and unconscious on the streets of Las Vegas after a night on the town. Congratulations Walker! You may now wear the Silver and Black! 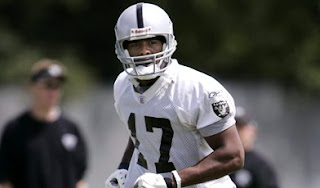 UPDATE: There are photo's of Walker and others spraying people with champagne. Oddly enough, this was also rumored to be going on the night Darnett Williams was shot to death (Walker was in the car). You'd think he'd learn. However, he has released a different story - mocked cleverly on KSK.
Posted by Muumuuman at 9:14 AM

Email ThisBlogThis!Share to TwitterShare to FacebookShare to Pinterest
Labels: Break the beat like a leg in the MLS, hazing, Javon Walker, Raiders, rite of passage

Good for him. Nobody enjoys the liminal state.