Shanahanigans: So far so good

The Washington professional football team has placed a $3.1 million, first-round tender on QB Jason Campbell. While this doesn't guarantee Campbell will remain in the burgundy and gold, it establishes a high price: another team would have to pay up and offer a first-round pick.

Teams which have the greatest need for a new QB include Oakland and Buffalo, but I think the team most likely to approach Campbell is the St. Louis Rams. I'm hoping that their brand-new owner wants to draft a billboard QB and thereby build his legacy. There's no doubt that Campbell would rather stay in DC.

Washington also placed a first-round tender on CB Carlos Rogers. It's unlikely that any team will forfeit that pick for a CB who, though good in coverage, is simply incapable of catching INTs. 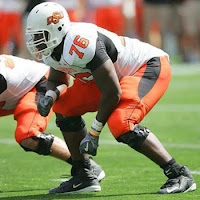 Cementing these two free agents (though it's still drying) resolves two of the five major question marks for the 2010 season.

The number-one need, offensive linemen, has only become more dire. Former Pro Bowl LT Chris Samuels retired, RG Randy Thomas was released. Things are shaping up to force Washington into drafting at least two linemen: at this point, we just need intact bodies. LT Russell Okung is the highest-ranked O-lineman in the draft; if he is available at #4 that pick is a no-brainer.

Another need: LBs for the 3-4 scheme. I have a bad feeling -- consider it skepticism, not cynicism -- that we'll revamp our personnel for the 3-4 and then Haslett will get fired and we'll go back to a 4-3 and have to revamp our personnel yet again, always playing catch-up. Our D has been solid these last years, so why are we ripping it out like mildewed dry wall ?

Another need: a placekicker. Still.
Posted by Andrew Wice at 2:13 PM

Andrew, what do you make of the rumors that the Drunken Savages are after both Peppers and Dansby?

Do they fit that 3-4? Peppers says he wants to be in a 3-4, and I have a hard time seeing how Dansby couldn't fit any system created.

But what about the Hundred Million Dollar Man? How does Albert Haynesworth fit in a 3-4?

Haynesworth is a prototypical 4-3 DT. He has a great push and can crush the middle of the pocket, even when double-teamed.

People assume that he'd be the nose tackle in a 3-4, but it's a position he's never played and the responsibilities are entirely different. He's going to be frustrated, locked into a scheme that forces him to play two gaps rather than push upfield.

People are also penciling in DE Andre Carter to become an OLB, and forget that he left SF because he doesn't want to play OLB.

Dansby would be a good acquisition for a 3-4.