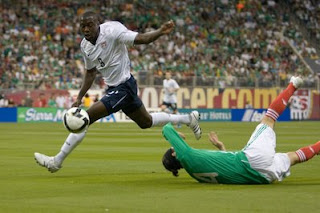 Jozy Altidore the future of the American Men's soccer attack is making what I deem to be a perilous move. The young stud (see photo of him leaving Rafa Marquez in the dirt) has been loaned from Villareal to Xerez in the Spanish second division. Xerez finds itself just 3 points from the lead of the division. Normally, this move would be a positive development for a young American who is trying to refine the skills needed to become the international star that many think he is destined to be. It will give him minutes on the pitch, something that he has lacked on the Villareal squad.

Unfortunately, those of us in the know, Barnyard I am looking at you, know that Xerez is the birthplace of sherry. The fortified wine preferred by upper class Brits and all socio-economic level Spaniards, could be the ruin of a young, impressionable Altidore. Like any of us who found ourselves in a foreign land at the age of 19, young Altidore will more than likely drink his weight in the local swill on a regular basis. I don't wish to begrudge Jozy his chance to explore binge drinking and all the wonderful benefits it offers. I will only mourn the great loss of potential that will slowly wash down the drain, like so many sherry induced upchucks.
Posted by Miwacar at 7:53 AM

Sherry is making a comeback...just like Jozy will if he ever gets some time on the pitch. -Sanford