NFL Draft, Or: Oh, Mike Greenberg, You So Crazy

This morning, prior to leaving for work, I was watching Mike and Mike (I know, I know) and "Greenie" said something that I find highly dubious.

He predicted that the first round of the NFL Draft (In case you haven't heard somehow, the First Round is on in Prime Time on Thursday night) would win the ratings battle for the evening.  Co-host Mike Golic was a bit more circumspect, saying that he had to know what was on before he made that prediction.

I predict "No way, Jose", for a couple of reasons.

A lot of the people who look at numbers, but don't really look much beyond the first blush (like, say Mike Greenberg) see this as an easy prediction for Greenie to make.  Last Year's draft drew 36.7 million viewers.  On a Saturday afternoon!  Why, on prime time, it will draw at least twice as much!

Last Thursday night, the lineup on the five "major" (that includes The CW) networks combined for 33.6 million viewers just from 7-8 pm eastern.  Most of that was Survivor and Bones (almost 4 million were watching a rerun of the Office, though).

Let me put it another way--last week, CBS in three hours of prime time, grabbed 36.65 million viewers--that includes, for some reason, almost 12 million people for a rerun--a RERUN--of The Mentalist.

That's one thing--those five hours of coverage generated big numbers, but only in the context of 5 hours of draft coverage, not for primetime Thursday night fare.

Here's the other side of that coin--the Draft last year was competing against infomercials and maybe a baseball game on your local Fox affiliate.  It has purposefully moved itself to face real competition.  I personally think that's a horrible idea.  They owned one Saturday in April, and now they are trying to make it 2 evenings in April.  That's overreach.

For the first hour of the draft, it will be going against all new episodes of FlashForward, Community & 30 Rock, Survivor, and Bones.  At least on the East Coast and Central Time Zones.  On the West Coast, you'll have your choice of new episodes, or the last third of the first round, as it starts at 4:30 your time.  Are people  in San Francisco leaving work early to see who the 49'ers draft?  I tend to doubt it.  Oh, and LeBron James and Derrick Rose will be going at each other on TNT, as will Kobe and Kevin Durant.

Why does this matter?  Who gives a shit about the ratings about the NFL Draft?  Well, to some degree, I do. Because I think this is a chance for the NFL power structure to get the shot across the bow it so desperately needs.  The NFL is clearly convinced it can do no wrong; that NFL fans will swallow anything the NFL spoon feeds them.  I think this is the one of the few times left it might get proved wrong before they rush headlong to the player lockout they desperately crave.

I'm not rooting for the draft to fail on prime time, but I think it will.  I don't think it will lose to the Vampire Girl Show on the CW, or anything, but anyone who thinks the Draft will win the night is living too much in the sports world.  Given the option, would you rather listen to Steve Carell and Joel McHale make jokes, or Chris Berman and Mel Kiper, Jr? 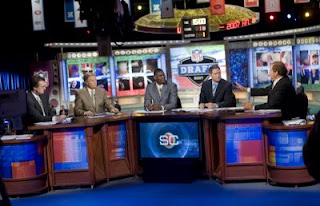 I predict a huge percentage of the folks who plunked themselves down in front of their TV on a Saturday afternoon for a few hours (like I have done, for the past few years) will do what I will do on Thursday night--watch their favorite shows, and during a commercial break, flip over to ESPNews and check out the Bottom Line to see who their team picked.  And suddenly, when given a choice of entertainment and something that isn't really all that entertaining to watch, will wonder "Why the fuck did I watch this shit last year?"  The NFL might take a step back and say, "Oh wait, our piddling Human Resources minutiae isn't the most important thing in the world?  Good to know."

Nice work, NFL.  You fucking dummies.  And nice predicting, Mike Greenberg.  You are my least favorite dummy of all.
Posted by Big Blue Monkey 2: The Quickening at 9:02 PM

I typed, "Why the fuck is the draft on a Thursday?" and I came across your site. The draft was like a good holiday for men to watch, drink beet and eat chicken wings. Why the fuck are they putting it on a night when I can't meet with the guys b/c we all have wives and kids. The NFL is always trying to fuck up their brand like they can do no wrong. This is 3 freakin' days of shit it only takes one full day to do. This shit is ridiculous.

Anonymous--using profanity will always help Google find our site. I recommend it.

And yeah, the NFL is determined to take that Golden Goose and butcher it in front of everyone. I bet tonight did OK (in certainly did not win the night) TV wise, but tomorrow night?

Are people really going to tune in on a Friday night to watch the 2nd round? Maybe long enough to see where McCoy and Clausen go?