The Newest in European Style

We all know that Europe is usually setting trends in world fashion. In fact, I find myself looking at trendy Europeans and shaking my head and doubting how anyone could wear that shit. Usually, a few years later I am wearing something similar to that which I previously scorned.

European soccer has long been a hotbed for fashion forwardness and all around good fashion sense. On Wednesday, I witnessed the continuance of this trend. No, I am not talking about Jose Mourinho's Armani get up, but rather the hairstyle of the world's greatest player.

Cristiano Ronaldo is well known for his fashion sense. From designer jeans, shirts and shoes to hand-crafted suits. Ronaldo is also very well recognized for the various hairstyles and hair colors that he has donned over the years. On Wednesday, the world was introduced to his newest hairstyle, a little something I would like to officially name "The Valdez". No, this is not a reference to some Spanish or Portuguese hero, but rather a nod at the horrible ecological disaster in Alaska.

I tried many times to come up with what exactly Ronaldo's hair reminded me of ( ask BBM). At first, I thought his new faux-mo, with rat tail, dripping with oil and sweat reminded me of a wet, moldy chamois rag. I soon continued my search for description because the chamois rag just didn't capture it. Then it hit me. The longer hair (faux-mo) reminded me of the sea otters that you see rescued from oil spills. It was the slick, ruffled, mottled fur of a sea otter who has found himself in range of a massive oil spill. Ronaldo's hair has always been a little "rico suave" but now it is the sauviest ever.

Apparently, it is an asset to his play. He used the the otter to smash a wicked header into the back of the net, and his fast pace seemed even faster on Wednesday night.

I will never adopt that european fashion. I swear. 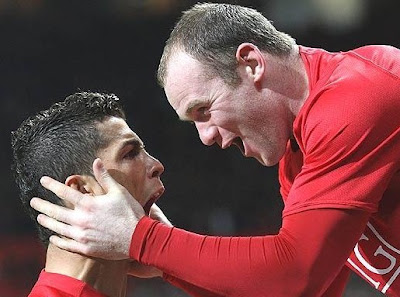 Photo courtesy of Getty Images
Posted by Miwacar at 7:09 AM

Miwacar, your man card has earned five new punches. This little diddy is grand. I frequently use my friend's love of European football to talk fashion. His shoes and accessories have improved immensely.