The Lions Finally Cover the Spread 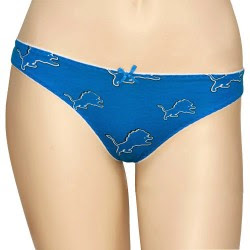 Via a reader named Josh (who also sent it to Randball, which makes Josh a bit of a blog-whore) we get this lovely item available for purchase.

Josh was quoted by Randball as saying "Who on earth would buy that? I suppose a woman could use it as a chastity belt, because any dude would know he’d be going 0-fer after seeing that surprise. It may also appeal to those giving up sex for Lent."

I could not disagree more.  This is a signal that the woman in question is interested in some casual Sunday scoring.  And lots of it.  I'd recommend it for any Detroit lady fan who considers herself a "bottom".   (Extra kink bonus:  have your significant other dress up as Matt Millen).

Some of these images should be jarring.
Posted by Big Blue Monkey 2: The Quickening at 4:59 PM

Email ThisBlogThis!Share to TwitterShare to FacebookShare to Pinterest
Labels: B3 Hammond is the coolest organ not in my pants, Detroit Lions, salacious detail, sex

Word on the street is that former Lions Assistant Coach, Joe Cullen is now suing the Lions for wrongful termination. He indeed was not naked when he used a Wendy's drive-thru... these panties were just so porous, you could see right through them.

Another jarring image. Thanks, BF.

I think the Detroit Lions onsey/bib combo also available says to world "my baby is a loser".
There is also a Detroit Lions garter belt to go with the panties. The woman that catches that at the wedding probably won't be the next to get married, but will get scored on that night by the entire wedding party.

(Extra kink bonus: have your significant other dress up as Matt Millen)

You are one sick fuck, Big Blue Monkey. Time for a Can't. Get. Clean. shower.

Well, who's f'ed the Lions more than Matt Millen? I guess Mr. Ford. I dare you to look at this picture of William Clay Ford Sr.: