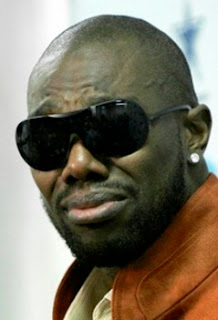 It has been confirmed: Terrell Owens was cut by the Dallas Cowboys. The active leader in TD receptions (#3 all-time) was informed by text message that he'll have to find another team to destroy.

No need to recount his evisceration of his Pro Bowl QBs, no need to bring up his last season in Dallas with all its tantrums and childish accusations. No need to mention that according to Dallas owner Jerry Jones, "the entire time Bill [Parcells] was coach they never spoke." No need to point out that T.O. has B.O.

The epitome of brash, arrogant, me-first WRs, Owens is an obvious risk to any team which brings him in. He is extremely talented and can be a dominant player, but the damage to a team's psyche is one of the most obvious red flags in the history of the NFL.

Therefore, I am urgently hoping that Owens signs with Oakland Raiders. It's so perfect! I've been waiting for those two dirty diapers to get together for years.
Al Davis and Terrell Owens ... a match made in douchebag heaven.
Posted by Andrew Wice at 11:31 AM

Oh, and the headline should not be baby for sale - he was cut - not even trade worthy. How about baby tossed into dumpster up for adoption.

One news article said he was notified of getting cut by a text message. Oh oh, here I go again..

That picture will never get old. NEVER.

I care not about TO's BO or his pink-slipped text, but I love a good laugh, and Mu's laughter is infectious. Good way to start the evening.

Ideally, he'll sign a four year contract with the Raiders for $200 million. Cut after the first year, TO sets every receiving record in the Canadian Football League ... but never gets the Gray Cup.

Is the Gray Cup different than the Grey Cup?

I always knew that you told me you were a Montreal Allouette fan just to get in my pants, Wice. Damn you, eh.

I've always preferred the alternative spelling when writing about Canadia.