Our Little Novelist is all Grown Up

Our little novelist has finally become a man novelist. L'chaim! With the release of his much anticipated new novel "To the Last Drop" our co-contributor and friend Andrew Wice finally realizes his life's calling.

When reached for comment, a surly, recently awoken beneath a cat Wice had this to say," Let me just put my shoes on..." Nearly twelve minutes later he added," 'tis a joyous occassion this day is. I have long visited this day in my gossamer visions of an ideal existence..." After that this reporter just walked out of Mr. Wice's shack, trying hard but failing at not stepping on any of the dozens of malnourished cats in the entryway. 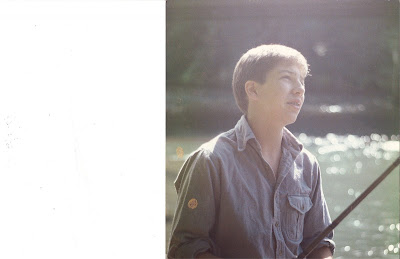 It's cropped out of the photo, but I had just hooked a twelve pound tabby. She fought hard, but I was in peak physical condition back then. Nevertheless, I still have the scars on my hands from trying to land her.

Suddenly I want to see A River Runs Through It. Awwww.

I didn't realize that a concave chest was an indicator of peak physical condition.