Well, I'm just getting my ass kicked by all you dilettantes. I clawed back and scored ... zero points again this week. 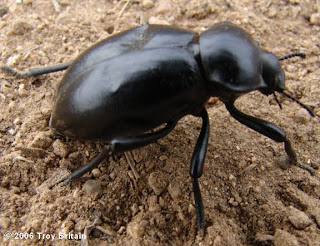 The reason for my losing is the Big Shoe I keep putting on, without tapping it out first. Once upon a time, I thought it was an old wives' tale about knocking the bugs out of your shoes before putting them on, living out here in the desert. But a few years back I knocked a healthy house spider out of my boot, with my toes upraised and ready. Since then, I've laced up both work boots and basketball shoes and made it a fair distance before conceding, yeah, that isn't just a bunched sock a-wiggling in my arch. Big Cool Freaky Beetles!

We're one quarter into the season and there's some right competition at the top. Down at the bottom, I remind all contestants -- and myself especially -- that the Big Shoe pick is the most important pick every week. Blow it, as I have done every week, and you're just the cramped bug suffocating under some heavy toes.

Bonus Questions +2
6. Blowout Bonus: which game will have the largest point differential?
7. Loser Bonus: which of the remaining winless teams (49ers, Lions, Panthers, Bills) will be the last to record a win?


* Leftnut has consistently (and bravely) picked against Pittsburgh as his most disliked team. That Houston is Leftnut's favorite team is now established (as of last week's picks). Or, Leftnut, sacrifice one point and finally tell us who your favorite team really is.

** The Green Bay Packers were named for the Indian Packing Company, their first sponsor. They packed "meat" for the U.S. effort in the First World War. They shut down operations before Upton "The Jungle" Sinclair was able to prove that they were actually canning Native American flesh. Hollywood took the story and ran with it, resulting in "Soylent Green."

That being said, this is a tough week to pick.

This year I am picking Houston as my favorite. Every year I pick a new one. Kind of like adopting a mutt from the humane society. Frankly, I have no problem with sticking with Pittburg to lose. It is worth the -1 to root against them. Of course the luckiest team is on a bye, so this week I will stick with Houston to win.

Leftnut, I support your pick of Houston.

The good news is, the IDYFT pick is worth +1, but a wrong pick won't cost you anything.