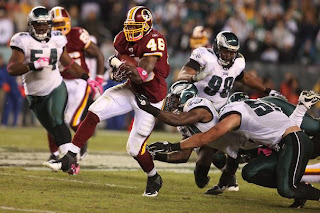 Washington, at 2-2, sits atop the rubble that is the NFC East. While their point differential is in the negative and this team is far from a finished product, Shanahan seems to have the Skins moving in the right direction.

At last season's quarter mark, Washington was also 2-2. But their victories were over the Rams and Bucs (a combined 4-28 last year) and they lost to the Lions. The Skins immediately drove off the road into a shit ditch, losing their next four and finishing 4-12.

How good are these 2010 DC Skins? Short answer: not especially.

Long answer: ah, you know I love long answers. Especially to questions that I, myself, have proposed.

Offense
The offensive line has been hampered by growing pains but they are finally starting to open a few running lanes. #46 Ryan Torain has emerged as a powerful and quick runner -- check out Torain sending an Eagles player ass-over-teakettle and scoring a TD. Pass protection has been pretty good but they'll miss Portis on blitz pickup. Washington is still waiting for WRs to emerge. McNabb has shown good poise and decision-making, but accuracy must improve.

Defense
This defense has both more potential and more current problems than the offense. The transition to the 3-4 has not been without its boners. DEs in coverage have yielded an unlimited buffet of first downs. Pass coverage is excellent for stretches, but good quarterbacks will find big holes to hit. Run defense seems to be improving. The emphasis on creating turnovers in key moments has already won two games. After leading the league on 4th down conversions last year, Washington has given up 6 of 7 this season, dead last in the league. 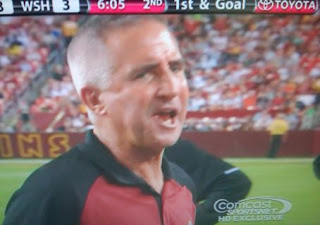 This unit has the most continuity, under coach Danny Smith; no wonder that it is easily the best part of this team. So long as our specialists don't injure themselves in warmups, special teams will be contributing more than their share in every future win. If Lil' Brandon Banks can hang on to the ball, they have their most dynamic PR since Brian Mitchell.

UPDATE: P Bidwell has been replaced by last year's P Hunter Smith, who was solid before suffering a late injury.


Long Answer in summation: it will take a lot of work to find their potential, but it's going to be a hard road. Remember, Washington has the 8th hardest schedule despite a 4-12 finish. They definitely play to the level of their competition, which may be a good thing.
Posted by Andrew Wice at 10:18 PM