Conduct Detrimental to the League 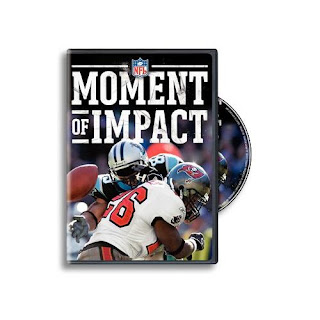 With the stunning alacrity that only a complete abdication to hypocrisy can make possible, the NFL has announced that those "devastating hits" which they have used in every advertisement since the beginning of the league are now punishable by suspension.

Sure, I agree with all of that. And certainly some paid analyst will mention the impossible situation where, at a closing speed of forty miles per hour, a player will be suspended because he hit too hard. Even though pulling up could result in greater injury to the defender. Even though a suspension could follow any contact between either players' helmets and any other parts of their bodies. Even though ducking could bring a ballcarrier's helmet into the suspension zone in a split second. Even though a suspension could follow any contact deemed "devastating" by some faceless executive watching the tape in ultra slow-mo, whether or not helmets were involved. 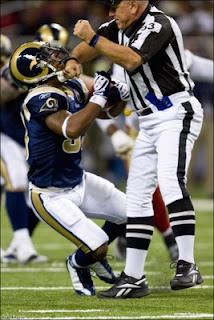 I merely want to lend my voice to the bonfire which roars that this is hypocritical bullshit. The NFL obviously wants the league to have every game be a 59-60 barn burner with thousands of yards in passing every contest. But they also want to promote their product with awesome, slow-motion full contact football promotion.

Over the next week you will hear every sportsjack complaining about this ruling. The NFL is over-reacting, like every failing league (NBA, MLB) and will only dig themselves deeper into public approbation. Facing an ugly labor disagreement which could destroy the sport, the league is looking to gut its prime attraction. Fucking retarded.

You want to know what is conduct detrimental to the league? It's the Ravens having two fourth-and-inches opportunities at midfield, and punting both times ... to lose by three in overtime.

You want to know what is conduct detrimental to the league? Kellen Winslow, Junior, making an absolutely meaningless first down while losing 24-0, and celebrating like he just brought down the Roman Empire by himself. 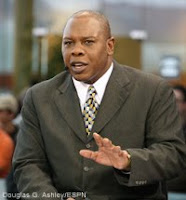 By holding defensive players to an impossible standard, we'll see more career-ending knee injuries for ballcarriers as well as head/neck injuries among tacklers who try to adjust and keep their heads down. This is absolutely horrid, shit-flavored soup the league is serving us. I wish they would just go ahead and fuck themselves with the gentle swirling motion they seek to impose on my only favorite sport. Cause we're getting ... JACKED UP!

Are you ready for some sissball?
Posted by Andrew Wice at 5:20 PM

Email ThisBlogThis!Share to TwitterShare to FacebookShare to Pinterest
Labels: are you ready for some sissball?

JoePop has an answer: get rid of the facemask. The reasoning is you'll be unlikely to lead with your head if your face isn't protected.

Would you rather have a brain but no face, or a face but no brain?