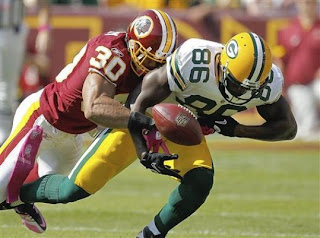 The Washington-Packers game was one of the most frustrating games I've been unfortunate enough to witness. But the Skins came away with a win, somehow. I can't imagine how fans of Green Bay must feel. But I'd like to try ...

Washington overcame their worst playcalling in memory, terribly inaccurate passing and allowing over 400 yards of offense. The most consistent offense was the pass interferences that Green Bay finally started getting called for. Laron Landry had another monster game with 13 tackles, FF and INT. Brian Orakpo had two sacks but was once again held on almost every play, drawing only a flag or two.

For most of the game I was screaming, "Run the fucking ball!" It didn't work. The offense is not Mike Shanahan's realm but Kyle Shanahan, who despite his success through the air in Houston, failed to develop a rushing attack (30th in 2009). Green Bay has an outstanding pass rush and good corners; their weakness is against the run especially up the middle. So Washington threw 49 times while surrendering five sacks and a lot of hits, and looked ugly doing so.

Running was less than an afterthought: 75% of the called plays were passes, a number that skewed upwards in the second half. Starting from the last drive of the third quarter until they were setting up the game-winning OT field goal, Washington called 29 passes and 3 runs. Like I said, I was screaming. 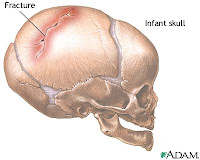 And yet Washington won with a couple big plays and crushing hits that left Green Bay receivers loathe to catch the ball. Once again, the defense saved the game with an early goal line stand. Yet again, Washington caused multiple massive injuries to their opponents. Once again, the defense forced a turnover at a critical time. Thanks for the boner INT, Rodgers! Enjoy your concussion!