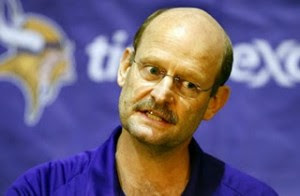 Big Blue Monkey offered his analysis [keep scrolling down], which was mainly the confirmation of his predictions about the game. But I am here, friends, to offer some therapy to both winner and loser.

The main thing to remember is that it was the first game of the season.

Rhythm of the Saints
The Saints rhythm was very impressive in their opening drives of the first and third quarter. But once they got out of their scripted openings, the offense was stumpy until they remembered that they have a rushing attack. When things went wrong, they were close but not quite. When things went right, the Saints looked sharp. This is likely to be their lowest output of the season.

Bringing Favre Along Slowly
As I expected, the Vikings didn't expose Favre to many hits. Until the impressive half-ending drive (beating the blitz down the seam), the only passes were screens in expectation of blitzes. This was modestly effective, as was the run game.

But as Big BM pointed out, the Vikings felt the pressure to spazz out with passes even though they were only down 8 points. Favre has a ways to go before he looks good in this offense again. He was tired in the fourth quarter, going 4 for 8 and 48 yards. Not practicing will do that to a player. Peterson was running fairly well, yet had zero rushes in the fourth quarter.

The Saints kicker "Pat" Garrett Hartley missed two field goals. Last year he had some problems, but a fine post-season. He better get himself straight in a hurry.

Do you credit the Saints rush or blame the Vikings line for the extra-point block? I firmly believe that an extra point should never, never be blocked. That is some weak sauce, Vikings. Your punter looked good but you must take care of the details.

Coaching
For the Saints, Gregg Williams's defense blitzed a lot for modest results. But blitzing against the Vike's hurry-up allowed a TD. All the blitzing forced LBs into coverage, and Favre-to-Shiancoe did some damage. The Saints will play teams that aren't this depleted and rusty. They need to calm down before they blitz the game away.

Vikings fans must be starting to get frustrated with Childress. The Vikings committed terrible penalties on offense at the worst possible times, repeatedly killing momentum. That's bad coaching.

In the second half, Childress made a stupid, emotional challenge that lost a timeout. He made the situation worse by punting from the Saints' 44 yard line with 5:30 in the game.

I know that it was 4th and long, I know that your punter was placing the ball very well. But you're losing and punting to the defending champions. Did you really think you'd get the ball back? Punting only moved the ball 32 yards. That's a give-up play, and the Vikes heeded their coach's message.

The Saints pounded the ball right at the highly-vaunted Vikings' front seven. The Vikings never touched the ball again. I've seen Childress do this time and time again, including the NFC Championship. I am not impressed.
Posted by Andrew Wice at 12:04 AM

By the end of the game, he looked like a kid marching into a coal mine.