Professor Badcock's heavy-water experiments flooded the three floors housing the IDYFT Pick'em Computator. This slowed down the final tally. Additionally, there is now a suffocating odor of mildew throughout Badcock Industries, Inc.

Trivia Question Round-Up
Crunching these numbers was actually somewhat entertaining. It was like watching the season's expectations flash past ... as if swimming in a school of silver-sheen, stupid fish. Yes, there is much to be proud of. 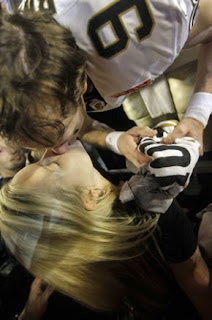 TQ1. The team picked by our contestants for the most "Shoe-ins" was your Superbowl Champion New Orleans Saints. Over the 17 week regular season, they wore the Big Shoe 24 times. Gratification should be our watch-word: 22 teams were fitted for shoes by our contestants, a damn fine spread. The Saints were followed by a Ravens/Packers tie, then a Colts/Cincy tie. No one got this question right. 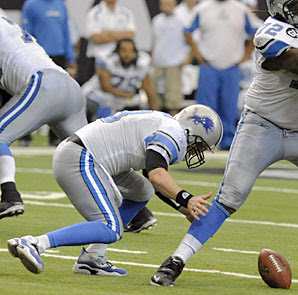 TQ3. The team which most often appeared on the Underdog List was, (surprise!) the Detroit Lions. They were considered a severe fudgfest in 12 of 16 games. Final record? 2-14.

The Detroit Leotards were followed by the Raiders and then Tampa Bay. Eighteen teams made this ignominious list, a damn sad spread. Leftnut, MMMan & Jess got this right.

Cincinati's surprise season ended with the dull splat of playoff fudge pie. They made all three lists, which underlines the eyebrow-raising yet ultimately disappointing Bengals season: 13 Shoe-Ins, 1 Clash, 4 Underdogs.

Anyway, the Superbowl Pick'em Winner is...

While Leftnut scored an incredible 30 points in one week (with 19 bonus points thanks to picking the Saints to win the Superbowl at the beginning of the regular season and the playoffs), two-time champion Jess was consistent through the tournament and finished with 31 points.

Congratulations, Jess! Would you like another t-shirt? Otherwise, I can randomly select an item from my house and mail it to you. It could be my car keys, it could be a pint of hot dog water, it could be anything. Hmm?

Thank you for your participation. Here at Badcock Industries, we look forward to providing the 2010 Uncapped NFL Pick'em in only seven months. Until then, nanu-nanu.
Posted by Andrew Wice at 5:09 PM

While I adore my t-shirt, I so want something from your house.

It shall be done.

Also: eat it, suckers. I won again! Though, this was the post season pick 'em, as opposed to the regular season version, which is what I won last year. So, really, it's mildly different and I shouldn't be gloating. I'm terribly sorry.

In fact, you should gloat more. Winning two different types of pick'ems means that you have a wide range of prognosticating skills.

Congratulations Jess. I was out of town on vacation part of the playoffs, hence I avoided a bunch of negative points from likely incorrect picks. That was the only reason I ened up with 30. That and dare I say the Saints had a heavenly inside line to the super bowl? More likely was Favre tossing an interception in overtime. He seems to have a knack for that sort of thing.

Thanks for the great web site,