I Can't Be The First

I can't be the first to think that Ladainian Tomlinson is going to the Eagles.

When I read that Tomlinson was released and wanted to go to a team with a chance for a championship (i.e. any team that is not coached by Nerf Turner), I ran through all the possibilities in my head: which championship-caliber teams are short one dynamic, part-time running back?

I considered the Eagles, but assumed that Westbrook was returning. However, Westbrook's contract was terminated today*. Who is going to pair with McCoy in the pass-happy (which includes the RBs) Eagles offense?

I can't be the first one to call it: LT goes to the Eagles, which sucks for me. 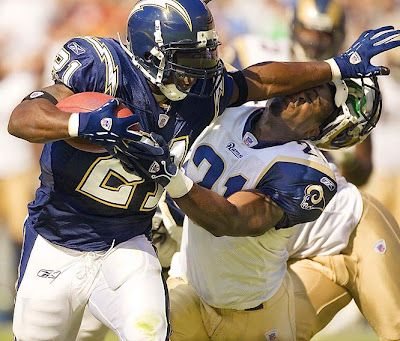 * thanks again for breaking him, London Fletcher!
Posted by Andrew Wice at 8:18 PM

I have assumed much the same, for many of the same reasons. Apparently it is a favorite destination, assuming that the Eagles don't trade Donovan McNabb.

Sure, now that I posted it, it's a favorite destination.