Although fans of the Washington football team have a right to feel disappointed that their highest-paid player isn't making an extra effort to be with his team, the anguish has been out of proportion to the issue.

In addition to a decade of bad football and nearly twenty years since being a World Champion, fan fears have been stoked by reactionary media coverage. As I documented recently, reports of teammates turning against Haynesworth are manufactured nonsense. 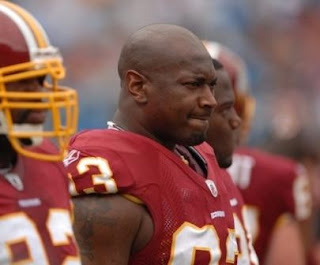 Philip Daniels, whose inarguable statement that "it says this is voluntary, but for us, what we went through last season after a 4-12 season, it's mandatory. He should definitely be here. And it's a shame he's not," was used as a fuse to ignite this bogus controversy.

After witnessing the diarrhea flood powered by his words, Daniels clarified his remarks by posting directly to the official message board, where the Haynesworth-hating has been the hottest:

"Just wanted to drop in and say that I have read a lot of the comments on here and some of the fans on here really do believe everything that they read. Articles tend to leave things out and when you talk general stuff sometimes it comes out a different way. I am not upset with Albert at all but the whole team would love for him to be here with us getting ready to win a championship. When a reporter asks a question, we answer it but sometimes that answer is twisted in so many ways. None of the good stuff you say ever comes out in the article. They chop your words as they see fit and in the best way to sell papers or go public. Albert is a key part of the team and he will be ready to go. Just wanted to clear things up a little for the people who believe everything that writers put out there. Like the old saying goes: Believe none of what you hear and only half of what you see ... I have tough skin and that don't bother me. Albert and I are cool and he knows the truth. I wish some of the fans could have been on the other end answering questions that later get chopped up in a negative manner. I laugh at the comments because really they don't know and take things way too seriously before knowing the truth."
Posted by Andrew Wice at 12:10 PM

Email ThisBlogThis!Share to TwitterShare to FacebookShare to Pinterest
Labels: The unbelievably horrible state of contemporary journalism

Gots to fire Ain'tsworth offhis fat A$$ and mak Colt Brendan the QB!!!!!