Over yonder, a fellow-sufferer named Brandon Keener has presented his list of the top ten worst signings since Dan Snyder engorged my favorite team. It's worth reading his take, as it's about the only thing left to discuss this season. But just to spark things on our (ad-free) side, here's the skeleton list: 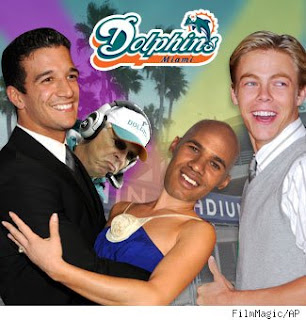 I'll just fire up the Hardened Cynicism Express: where's Jason Turd Taylor on this shame list? He's got to be #3.

Check it: in 2008, Washington traded a 2nd round pick and a 6th round pick for the once-dominant DE. The Skins picked up his remaining 2 year, $16.5 million contract.

He was gone after one year, in which he started in just 8 games and recorded only 3.5 sacks. After returning to his true love (Dancing Queen Live or whatever), he admitted that he had been rooting for the Dolphins the entire time. But I explained that point much more colorfully here.

And while I wish death-by-diarrhea upon most of these chumps, some of them were put into a position where success was impossible (8,9,10). Sad indeed, that you (dear reader) can think of many more chumps who deserve to be on this list. Just to get you started, here's a list of Washington's starting QBs. Remember, Snyder took over in 1999.

One last word: only by dint of McNabb's surprising health have we not had to swallow the vomit of Gross Rexman leading the Skins. His very first play was a fumble returned for the game-turning TD. By the Lions. If he had one single start, Gross Rexman would be in the top five of this list. At this point, all I can hope for this season is that Gross Rexman never starts.
Posted by Andrew Wice at 11:26 PM

I'd say the Accumulated Crap Basket of RB's take over #10. Schottenheimer did a respectable job, was fired, and then did really respectable work in San Diego, only to get fired for another Skins castoff in Norv "Nerf Neck" Turner.

Marty took a bad team, and made them a .500 team. All of the guys they brought in to run the ball this year can't say that. Though I do have my eye on James Davis, as sad as that is.