Frankly, that headline may be a bit of a cheat, because come Monday the 27th, I'm pretty sure Washington State's 10-1 record (that one loss a close one to then #5 Kansas State before the shit went down) coupled with their win over the #15 Baylor Bears tonight will finally get them the notice that they have deserved.

Doubters may justifiably point to their schedule, and specifically, the lack of top-notch teams that the Cougars have played up until tonight's game, and that's a reasonable observation.  But that sort of thing hasn't really stopped a team like Syracuse, for example, to reach the Top 5 of the National Polls without playing a single game on the road, and featuring mostly cupcakes like William & Mary, Detroit, Canisius, Cornell, Colgate, Iona, Morgan State, and Drexel.  Sure, Syracuse undressed Michigan State in NYC, but so has just about everybody of late (including Texas in East Lansing).    (Incidentally, Syracuse has one game against Georgia Tech that's listed as an "away" game--it was played in Atlantic City.  Yeah, they were on the road.)

I don't mean to pick on Syracuse (OK, yes I do) it's just that they started the season highly ranked, and the fact that they haven't lost to a bad team hasn't just kept them where they started ranked--it's moved them up.  As I joked awhile back, a three-point win over William & Mary should have maybe moved them down the rankings. Frankly, so should playing thirteen games in New York.  Play someone on the road outside of your conference schedule!  Just once! 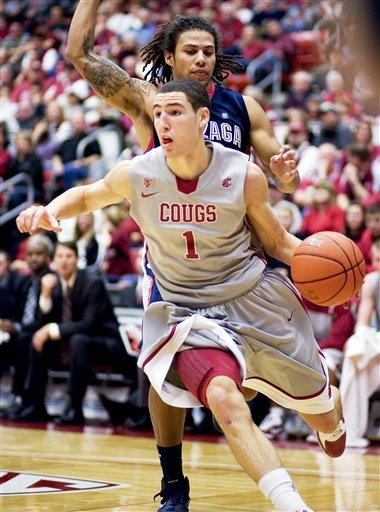 But let's talk about Washington State.  Let's start with the best player you probably haven't heard of (unless, somehow, you've managed to still follow the PAC-10, despite the slide that conference has been on the last couple of years)--Klay Thompson.  Yes, "Klay" with a "K".  He's the son of former Laker (and former Timberwolves announcer) Mychal Thompson, so the funky spelling is apparently genetic.  Klay is a junior and  a good sized guard--6' 6", with a deft shooting touch, and an ability to create space for his own shots.  He's currently averaging over 21 points a game this year, and does a bunch of little things that help his team win.  When Washington State ate Gonzaga's lunch earlier this year, Thompson didn't just put up 24 points--he grabbed 6 boards, threw 6 dimes, and had seven steals.  That's a well rounded game right there.  He makes them go, and having a legitimate star on a team is a big part of being a dangerous team come March.

They don't have a real talented big man, but they are deep--four guys over 6' 10"; the most important being Australian sophomore Brock Motum, who is certainly capable of getting into double digit points, and will, as the season rolls along, start racking up some double-doubles.

I should also note that this team can win without Klay Thompson--against Baylor, due to some foul trouble, Klay tied his second lowest amount of minutes all season long--27 minutes.  Sure, that still sounds like a lot, and it is a good number, but he's usually on the court for well more than 30 minutes of game time.   In that time--20 points, 4 assists, 3 steals.  I don't think anyone can necessarily wrest the Player of the Year awards from Kyle Singler, who was anointed with those accolades before the season started, but Klay Thompson will get some votes.

In what I think is still a weak PAC-10*, watch out for Washington State.  And given that for those of us in the Midwest and certainly folks on the East Coast, we won't get to see them play much, remember what I'm telling you now.  You are welcome.


*Consider, the December 20th Top 25 had two teams further west than Texas.  And neither of them are in the PAC-10 (or is Gonzaga!).  That's San Diego State University, and BYU.   Others receiving votes include both Washington and Washington State (the only PAC-10 teams) and UNLV, Gonzaga, St. Mary's, and New Mexico (who just lost to Northern Iowa).

Good, good. I'll keep them on my radar. Apparently if I had a different internet, I could watch NCAA basketball for free.

But I'll find a way. Now it's certainly early, but do you believe that Wash State is a potential Great Eight* or Final Four team? Really believe they're in the top hunk? Or just a decent qualifier from a bad conference?

In a different vein, what's up with crediting the AP (plus a link)? Did the Legal Department advise you to do this? As a published novelist, I'm all for copyright protection. But a photo from the internet? If they're going to get paid for that, they already have.

If it's so important to them, slap a watermark on it. What are they going to do, sue you for damages? And if it's just about the principle, here's a principle for you: fuck the AP.

Newspapers have avoided the story (ha!) that more than half of your newspaper (in some cases, all) comes straight over the wire from AP. We have one source of journalism in this country. Check out the byline next time you read a paper without paying for it: "AP Staff Writer." Cutbacks in staff etc have obviously fired this along, but come on, man (thanks D-Nabb!).

The AP website is an obtuse obfuscation, signifying nothing. You can't get to them directly. And when was the last time you heard about the AP issuing a correction? Or maybe they get every single story reprinted in every newspaper correct, every single time.

* I'll be firing up my campaign to replace the asinine "Elite Eight" with the hot stop-n-pop "Great Eight" soon enough, true believers. I plan on running for governor on this issue.

It is super early as the conference schedule hasn't even started. But I think they have a top 3 player in the PAC-10 in Klay Thompson, with a solid roster around him. I see no reason for them to do get deep in the tournament.

But, of course, match-ups and rankings determine that. If the PAC-10 is so bad that even the top teams are hurt by that, and don't get good seeding, and Wash State is forced to play, say Duke, in the Round of Perfectly Adequate 32, then I wouldn't put them in my Elite 8. Probably, I wouldn't.

Also, as a Western state person, you should be proud of what's happening in the Mountain West. They could end up with more teams in the Dance then the ACC. Consider when UCLA beat BYU, it was considered an upset. Crazy.

It took 5 seconds to credit the AP, so I don't see anything wrong with it, though I agree with most of your thoughts on it.

Great Eight is never going to replace Elite Eight. It sounds too much like Grape Ape, Beagley Beagle.