Due to fiscal cutbacks at Badcock Industries, this year's prognostications did not have the benefit of high-speed punchcards and vacuum tubes. Instead, the team went back to basics: digging down deep for the truth.

Pro Football starts again this week. All the bullshit of the holdout can begin to bubble down. It is funny that the owners were going to hold back their product until players got a reduced percentage of revenue ... and then immediately gave $100 million to one player. For this bullshit, there were no football magazines this year?

NFC East: The Dream Philadelphia Cream Team should not have much difficulty in this troubled division. But it is damn obvious to me that this team is 100% guaranteed of imploding on the way to a pathetic loss in the playoffs. One of their players earlier tweeted that, with their wealth of talent, they were just like the Miami Heat. I agree, wholeheartedly. Watch your ribs, dog killer!

Dallas Cowboys are not capable of good team play. They have the personnel to be dangerous, but are a bunch of instant pudding heads. Fuck the Cowboys.

DC Skins might just be laying a decent foundation. With improvements in the running game & defense (both beginning only their second year in the scheme), they could be a good team in 2013.

New York Giants are poised to have a terrible, terrible season. The secondary is nonexistent, and team chemistry is so low that they just elected Tiki Barber as captain.

NFC North: Green Bay Packers are clearly far ahead in this division. They still need a better ground game to beat their out-of-division opponents, but the defending champs look fit.

Chicago Bears surprised me by making it to the NFC championship. I still think their defense is aging and their QB is a turnover-producing flapjack, but I can't dismiss an outside shot at a playoff spot.

Detroit Lions may have a good D-line but their QB is a punky turd with shoulders made of paper mache. I am really looking forward to watching him writhe on the turf by week 3.

Minnesota Vikings have the unfortunate symptoms of a diarrhea meltdown. With a new coach, no QB and major morale issues around the stadium & threats of moving, they will struggle. AP will face 9 in the box all year. 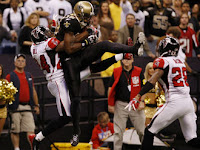 NFC South: Atlanta Falcons ought to make their challenge for a title this year. They need to peak in the playoffs, not mid-season. Generally well-balanced, but need a pass rush.

New Orleans Saints are talented and should be motivated after last year's embarrassing loss in the playoffs. Thanks to extra work by Brees and company, they'll come out clicking on offense. But can the defense tackle?

Tampa Bay Bucs are moving in the right direction. I haven't seen them play much, but I don't like the sound of their overhype. This team still lacks proven vet leadership and has depth concerns at every position.

Carolina Panthers are going to be first in line to pick Andrew Luck in next year's draft. Incompetent!

NFC West: this division is pathetic enough to drive a kitten to suicide. Guessing here:

St. Louis Rams have some pieces in place.

Seattle Seahawks suck and deserve to lose because they suck, especially their cheater coach.

Arizona Cardinals probably shouldn't have traded their only reliable RB.

San Francisco 49ers are stubborn about giving their QB one last chance. It's a dramedy!

Email ThisBlogThis!Share to TwitterShare to FacebookShare to Pinterest
Labels: nfl 2011

First thing--Vick's $100 million is so far away from being $100 million, it isn't even funny. That deal probably saved them money over franchising the guy.

That said, I really, really like your picks, in that you have the Giants and Vikings last. I WANT TO BELIEVE.

I might put Tampa ahead of the Falcons, but behind the Saints. I like the Falcons, but I'm entirely sold on their defense or their QB on the road. Tampa might be overhyped (they did have a nice schedule last year) but I think poise doesn't HAVE to come from veterans.

Carolina wouldn't be guaranteed Andrew Luck if they played in the NFC West.

I like where you have the Cards--a lot of talk has been about how Kolb and Fitzy will elevate that offense, but no one noticed that Kolb doesn't throw deep all that well, at least in his limited sample size of games (SEVEN GAMES).

49ers, if they played in any other division, would be locks to get Andrew Luck. See if they don't try to stack the odds in their favor a little at some point.

Only a few kittens were hospitalized in the making of this NFC Preview.

And, to be clear, we feel pretty bad about those kitties. It was necessary, though.