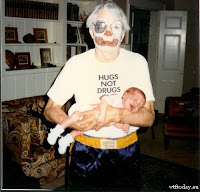 Without my beloved football magazines, I haven't done much research into the league as a whole. I find NFL coverage to be increasingly annoying. So I didn't unpack any of Dr. Badcock's previous prognosticators, and am instead utilizing Dr. Badcock's new Clown/Baby Nano.

With the lockout preventing teams from re-vamping, I believe that established teams will be at a tremendous advantage over their scrambling challengers. 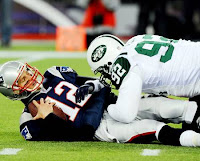 AFC East: New England Patriots: the most stable team in the NFL will own their schedule with sounds schemes, good linemen and sterling execution.

But the New York Jets, who should manage a wild card slot, are built from the ground up to beat the Pats. That will continue in the playoffs.

Miami Dolphins are sliding backwards. They will be less competitive than last year.

Buffalo Bills are dead in the water.

AFC North: Pittsburgh Steelers are the big brother in this division. Despite problems with their running game, their organization is resilient and will contend for the title.

Baltimore Ravens have their best-ever offense and won twelve games last year, even as the D ages. However, they simply cannot beat the Steelers -- a big problem.

Cleveland Browns will once again field a noncompetitive, gutsy bunch of losers.

But they won't be worse than the witless Cincinnati Bengals.

AFC South: Indianapolis Colts will start slow, but Manning will lead his team on a late-season streak to yet again take this under-performing division.

Houston Texans have an offense nearly as good as the Colts, but their defense is worse.

Jacksonville Jaguars have no future.

AFC West: Kansas City Chiefs may take a step back, but are well-geared to win this shitty division by rushing the ball 400 times.

San Diego Chargers have officially squandered years of having incredible talent in a shitty division. SI's Peter King picked them to make the the Superbowl, so you know they'll miss the playoffs.

Denver Broncos are a few seasons away from repairing the damage wrought by McDaniels.

Oakland Raiders showed definite signs of improvement and swept their division in 2010, so naturally the coach was fired. Still the worst front office in the NFL, despite stiff competition.

Email ThisBlogThis!Share to TwitterShare to FacebookShare to Pinterest
Labels: nfl 2011

Cincinnati is going to be better than you expect.

Houston's offense, right now, is better than the Colts, and so is their defense.

Chargers are the real deal.

You are really wrong this time around.

Ha. As the French say, fuck you!

Can't believe you, of all people, would drink the Chargers Kool-Aid. Don't remember that the Chargers have been picked EVERY YEAR to finally utilize all that talent, and they are the Real Deal?

You are forgetting about a coach named Nerfneck Turner.

I think the Chargers can win a lot of games despite Turner. They have THAT MUCH talent. The Chargers didn't flame out late last year--they started horribly, and had maybe the worst receiving corps of any over .500 team in the last 5 years of the league. Vincent Jackson is back; Gates is back. Tolbert is going to push for 1000 yards even as the "second" back.

I didn't say anything about the Eagles. Because, on that score, I may agree with you. Until the Eagles learn to pick up a corner blitz, they are going to have hard times. Or they can just using McCoy and Celek more. Which is probably what they will do.