DC Skins Will Beat the Giants in the 9/11 Bowl

Holy crap that Packers-Saints game was awesome. I suppose one thing the lockout taught us is to say 'thank you, NFL' more often. Fuck that, but the game was awesome. Both teams look good on offense, but the Packers looked especially sharp. 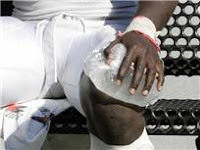 Looks like we'll be seeing a lot of kickoff returns from deep in the end zone out of frustration. They will sometimes result in awesome TD's (like tonight!). However, I think the new bullshit kickoff rule will result in more injuries.

As blocking breaks down (return blockers assuming a touchback) and a speedster ill-advisedly returns a deep kick , I anticipate some ghastly results. Anyone who has played knows that full-speed collisions aren't as dangerous as full vs. half-speed collisions. That will be the unintended consequence of this rule change. Do we have a statistician on board who can follow the injury-on-kickoff metrics?

In other news, the Giants are somehow still laughably overrated. Watch the DC Skins run the ball 40 times right over the open graves of their defense, now down six starters to injury. This game might be high scoring, but because of bad D rather than good O (such as tonight's game -- shazam that was awesome). I hope that Grossman plays well but unfortunately gets injured and Beck comes in ready.

Football has begun.
Posted by Andrew Wice at 9:38 PM

I do believe every last shit head has had a chance to reflect on my proposition.

Mark it down, dude.

Skins beat the Giants, I repeat.

It's so fucking obvious. Ain't like I'm picking the Superbowl (my pick is anyone-not-Eagles versus anyone-not-chargers).

Lots of people like this pick, though. As you point out, the Giants Defense is absolutely shredded to begin the season. No Osi, probably no Tuck, and basically the entire secondary is 2nd String. And Eli Manning led the league in turnovers last year.

I didn't watch a lot of the Washington pre-season, but what I did see suggested that Orakpo and Kerrigan are going to fuck some shit up, as long as the front 3 can hold some blocks. And the Giants runners have had fumbling issues in their past. I like your pick, I find it sexy as shit. I also don't find it Going Out On A Limb as much as you think. Pick the Vikings over the Chargers,and you'll have your angry chorus of doubters.

by "hold some blocks", I meant, "occupy some blockers".

How about that Donovan McNabb!