First off, I would like to explain as patiently as possible that when I posted that I had quit rooting for my favorite team because Gross Rexman became the QB of the future, I knew that it wouldn't stick.

I stand by everything I wrote, and in the general mind of NFL fans, Washington remains the worst-run laughingstock in the league. However, I have no better chance of changing favorite teams than I do changing my blood type.

Yet I was in fact confronted by people out here in my wee little town (Cowboys fans all) who derided me for abandoning my team. I wasn't aware that they could read, let alone read this site. While I'm not yet ready to slog through the muck of a Washington 2010 Season Review, a little blurb about a Snyder press conference prompted this here consideration. 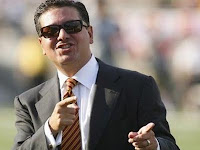 When asked by a Washington Post reporter what was the biggest mistake of his ownership, Snyder coyly referred to Haynesworth by saying, "I don't need to answer this. You all know."

A short while ago, I reacted to a blog which listed the top ten worst Washington signings of all time, and Haynesworth was number one. I didn't really disagree with that assertion, but now that it has evolved into the "obvious" answer I am compelled (due to innate orneriness) to question this.

When Haynesworth was brought in, Washington had a perennial top-ten defense that nonetheless struggled to force turnovers and win games on their own. They signed the big free agent tackle to bolster a blah D-line that was unable to pressure the quarterback. During Haynesworth's only season in Washington's 4-3, the defense went to #1 in short yardage situations and 4th down conversions, and the defensive ends recorded twenty-two sacks between them. While Haynesworth himself didn't dominate statistically, there is no question that his addition made a good defense even better.

Bringing in Haynesworth, despite his well-known character flaws, cannot be considered a mistake. However, the Shanahan regime imposed a 3-4 scheme which robbed the defense of its strengths and magnified its weaknesses. Haynesworth refused to play in it, a pure asshole move which was beyond selfish. But if there had been no change to a 3-4 (a defense which neither Shanahan nor Haslett has ever had success in), the issues with Haynesworth would not have forced him off the team.

If I had to point to Snyder's biggest flaw as an owner, it would obviously be his fantasy-style acquisition of pro bowlers. Rather than building a team through draft and development, Snyder operated under the assumption that the team was always just one star player short of the Superbowl.

If I had to point to Snyder's single biggest bust, it would have been the move which fundamentally defined his reign of error. In cutting Brian Mitchell for Deion Sanders after the '99 season, Snyder signaled forevermore that style trumped substance, that loyalty meant nothing, that a skipping jackass was more important than an entire team.

Brian Mitchell remains the best all-purpose back in NFL history, and will be in the Hall of Fame. He had three more years of strong production, but more importantly he was a team-first veteran lifer who held Washington together by sheer will. Even during a blowout in a losing season, Mitchell fought for every yard and left everything on the field.

By contrast, Deion Sanders contributed jack shit to Washington in his single year before leaving the league. But he got paid, big-time. This established the precedent that Washington is only a place to get paid. This perception has lasted through this 2010 season and is the essential reason why the team is the pile of shit that it is.

Anyone can make a bad personnel decision, that's not special. Invoking a culture of selfish star-fucking is much more impressive. Washington has now finished last in their division for the third straight time, an unprecedented feat of ignominy for this once-proud franchise. That Snyder would blame a single acquisition as his "worst mistake" is proof that nothing has changed.
Posted by Andrew Wice at 12:46 PM