If You Don't Buy A Shirt, Bright Eyes Will Cry.

Autumn sweeps in quickly, like a Junior High Janitor high on meth. Will you, like that hapless crumb of Thursday Chili Dog day, be caught unawares? Or will you purchase a handsome longsleeve version of the shirt above?

Believe it or not, the USA did win and did shut out Spain. These are two related, but different events, superimposed over the same patch of grass and the same 90 minutes.

First let's talk defense--the US was giving up a lot of the same crap it has been giving up, and some of it started with their own defense--instead of outlet passes, they were just sending long balls up relatively blindly, which led to just a ton of pressure on the US backline and Tim Howard. Tim Howard played brilliantly, and was aided, it looked to me, by a slightly off David Villa.

I'm not taking anything away from the US defense--they didn't distribute the ball particularly well for large segments of the game, but I give them all the credit in the world for the sheer guts they played with. It seemed that every shot that Spain took had a US defender, sliding in front of them, blocking shots, changing shots, clearing crosses. The few open shots they had, Tim Howard more than rose to the occasion. He was brilliant. The backline of the defense played the best pure defense I've seen them play in quite awhile. I wasn't sure about Bocanegra at back left, but he played great, and moving him there left room for Onyewu and Demerit to challenge in the middle. I've enjoyed Jonathan Bornstein's play, but the backline gets much more intimidating with those 3 guys back there all together. (Jonathan Spector has done very well at right back, but isn't intimidating. He's just solid, and a great overlapping runner on offense).

There are still too many pockets opening up for crosses, and that's on the wing midfielders to some degree. But on the other hand, the US is strong in the middle, and if they are comfortable with letting teams challenge them with crosses, so be it. I don't think it is a winning strategy--they were outshot a lot in this game--at one point, 29-9. But again, when it came down to it, and the shot or cross was coming in, the US stepped in and got the job done.

Quick note #1: Michael Bradley's red card was absolute bullshit. It was barely a yellow, and not just in a "real" game, but also in a friendly. There was no intent, there was barely a charge--he shortened his slide to keep it from being a foul. Horrible call from the referee in this instance.

The goals are about two players, and two mistakes. The player of the first goal, obviously enough, is Jozy Altidore. His defender made the mistake of crowding Jozy, thinking that a US player that big couldn't possibly have the skill to hold him off and turn with the ball at the same time. Jozy turned him so easily it reminded me of bull bucking a rider in a rodeo; Jozy turned and the defender was just too close on him, and too on top of him, and found himself riding the momentum onto his ass. Jozy had a decent finish; not a great finish, but good enough.

Quick note #2: Dear ESPN/International Media Feed, please stop showing Charlie Davies' way off target bicycle kick, just because the ball bounced up and hit the camera. It was not newsworthy in any way, aside from the news that Charlie Davies thinks he can hit a bicycle kick.

The second goal wasn't about the scorer, Clint Dempsey (who I have savaged of late, but played quite well tonight, including getting back on defense, something that has been lacking), or assist man Landon Donovan, who really should have taken the shot himself, instead of slotting a ball that hit two Spanish defenders (I'll get to that in a second) before Dempsey got to it. The player that this goal was all about was Benny Feilhaber, a guy I've been singing the praises of for awhile. He was a substitution with about 30 minutes or so left to play, and his awareness and poise on the ball is something that the starting duo of Bradley and Clark both are lacking.

When you see the ESPN highlight, they will bust out the AXIS technology and show you the questionable nature of Donovan's pass. But look at the work Feilhaber did preceding it--he took what was basically a 50/50 pass from Michael Bradley, moved past one guy with his first touch, exploded into the Spanish defensive zone--he had two defenders in front of him, and the guy he faked out looking to get back into the play. Feilhaber faked a shot, which sucked in the two defenders in front of him into a tiny space, dribbled just twice more to suck in one more guy, before he sent a gentle touch in front of Donovan, right at the top of the 18, with no one in front of Landon but the keeper. It was a brilliant little play. Everything that follows is a series of fuck-ups that just worked out well.

Quick Note #3: Dear Bob Bradley: I don't care if Rico Clark reads the bedtime stories you don't want to read to your son--no more starts for him. He's high energy, yes. He's an absolute worthless spaz with the ball, as is your son, and we need a true offensive midfielder in the middle. Please, no more Rico Clark, even though he played well for him. He's no Benny Feilhaber.

Donovan's cross was a poor idea. But the worst idea of all belonged to Spanish defender Sergio Ramos which was, "Hey, this ball came to my foot, and I'm pretty sure there isn't a skinny, rapping American behind me, I can take my time, look upfield, and clear this ball in a calm fashion." I had just been singing Sergio Ramos' praises this week, and he does this? Embarrassing for him--if this had been a World Cup final match, he'd probably have to find a new country to play for. As it is, he's going to get hammered for his cock-up. Look at this--Sergio has just stopped the ball on his own 6 yard box. He can't be unaware of Dempsey, Ramos was trailing him for a good portion of this play, but he clearly thinks he had more time than he did: 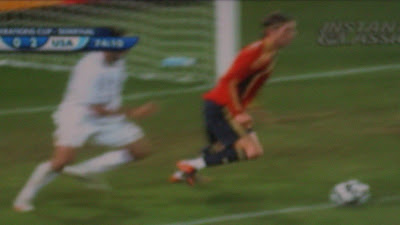 All in all, this was pretty much the game the US had to play to win--take advantage of mistakes, and not letting their own mistakes crush their own chances. Excellent play from the best players on the US, especially Howard, Dempsey and Donovan. Intriguing play by youngsters who deserve more time, like Feilhaber and Altidore. I'd still like to see Freddy Adu, but you know what? Let's just enjoy the fact that the US shutout Spain!

upcoming in July: Gold Cup, and the reassuring arms of the CONCACAF.

Posted by Big Blue Monkey 2: The Quickening at 8:21 PM

Donovan should have shot that ball. Very lucky that it wasn't cleared. He needs to grow a pair.