Some time back, your next President explained the despair of the middle class rather presciently:


"You go into some of these small towns in Pennsylvania, and like a lot of small towns in the Midwest, the jobs have been gone now for 25 years and nothing's replaced them. And they fell through the Clinton Administration, and the Bush Administration, and each successive administration has said that somehow these communities are gonna regenerate and they have not. And it's not surprising then they get bitter, they cling to guns or religion or antipathy to people who aren't like them or anti-immigrant sentiment or anti-trade sentiment as a way to explain their frustrations."

Elitist pablum? I think not. 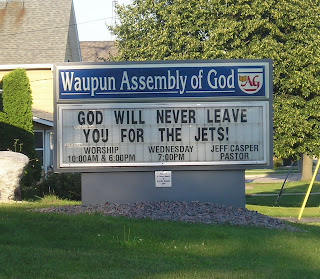 Packers fans, you are now Children of a Lesser God.
Posted by Andrew Wice at 1:00 AM

God would go to a better team than the Jets.