So, do you believe in Jesus yet? 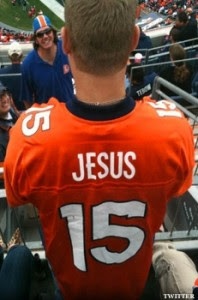 I watched part of the Vikings/Broncos game, and saw Tim Tebow in action. He can't throw a spiral, and is only slightly more precise than most defensive tackles. He's thrown only 1 pick in 7 games. He's 6-1 as a starter for the Broncos, who were 1-4 with a QB who could throw a spiral. What possible explanation could there be for his 6-1 record other than divine intervention? Tim Tebow is the strongest proof for the existence of God that I have seen.
Posted by Muumuuman at 7:44 AM