First and goal on the nine yard line. Under one minute left, down by one touchdown against the Hatriots. Sensational rookie RB Helu takes it up the middle for five yards. Second and goal, four yard line. 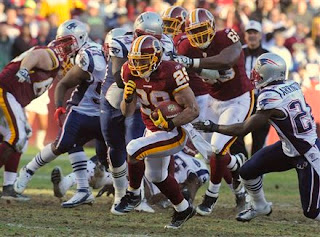 If you knew that your QB was Rex Grossman, who averages two turnovers per game, and you knew that his second turnover had already been overturned in the first half thanks to an admittedly bullshit roughing penalty ... you might want to run it in this situation.

Cheat your fate! If Grossman leads the league for interceptions in the end zone, maybe a pass isn't the best option. Washington earned 170 yards rushing against New England, with a 5 yard per rush average, and it was getting easier with every handoff.

I don't blame Grossman, who does his level best. His coaches need to gameplan around his two turnovers per game.

It's less than one minute left. Second and goal on the four yard line. Averaging five yards per run.

Instead: empty backfield, shotgun. Interception. Game over.
Posted by Andrew Wice at 9:51 PM

Email ThisBlogThis!Share to TwitterShare to FacebookShare to Pinterest
Labels: hyperbole, why does this keep happening to my favorite team?

Whilst I agree with your thesis, your particular argument is off.

Rex Grossman, terrible QB that he is, put that ball right on the hands of Santana Moss.

That ball should have been either caught, or dropped, not popped into the air. Blame the coaches all you want. I'll let people who blame Grossman blame him all they want. That ball hit Santana Moss in the hands.

That was one play. I'm talking about a season-long trend.

On that point, sir, we totally agree.

That's what makes my prediction, that I haven't actually made anywhere but right here, right now, that the Drunken Savages beat the Giants by 10 or more points so crazy.

And yet, I've got a feeling.

Me too, I gotta say. The entire division is a floating turd.

Look, it's not like you and I are sitting here and saying, "Clearly, the Drunken Savages are the better team." Heavens, no.

What we are looking at is that Eli Manning is getting some of that Tim Tebow love--"He's been amazing in the 4th Quarter!" and all that shit, but meanwhile, the Giants haven't been great on defense, and have played against somewhat suspect defenses.

And here they are, in what amounts to a big game, not for Savages, who were out of contention, but can spoil shit for somebody,and who better than the Giants?

And Eli, pass trapped against a helmet or no, isn't a great Big Time QB. Neither is Rex. Call it a push. But the Giants Pass Defense is terrible, and Rex can maybe throw against it. And I'll take Roy Helu over Jacobs or Bradshaw at this point.

It feels weird to say this about what is objectively a terrible Washington team facing a potential playoff team in the Giants--but I think we match up well.

Yes, I think they are circling each other in a race to see who gets flushed first. Our decimated O-line faces a D-line missing vital pieces.

Eli is definitely a better QB than Rex. But if the Skins can manage a game around Rex's GUARANTEED two turnovers, we could win a close game here. Let's just hope it doesn't come down to a FG.

Hey, who won by more than 10 points? The Drunken Savages? Who predicted that? I did.