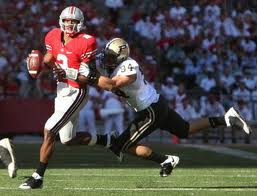 The DC Skins played the first round well, avoiding the Gabbert-hole and gaining a desperately-needed 2nd round pick from Jacksonville.

They filled one of their needs (though not a top need) with Ryan Kerrigan from Purdue, who projects as the OLB opposite Brian Orakpo. He reportedly is solid rushing the passer as well as versus the run, ball-hungry with more effort than athleticism. Holy shit, that sounds like a good pick. My own sources claimed that Washington was going to re-pick Heath Shuler.

Detroit is trying to build a serious D-line (why didn't Millen think of that?), the Vikings reached for a QB, the Packers smartly went O-Line and the Raiders didn't have a first-round pick because they are retarded.

Detroit isn't trying to build a serious d-line; they now have one. It may be time to work on that O-Line a bit, seeing as Matt Stafford is about to become the new David Carr.

Ryan Kerrigan seems solid to me as well. When they traded down, I thought we might see either Prince or Ingram, or a further trade down. But another Motor Guy on the Edge? I'll take that, gladly.

I'm told we should be excited by Hankerson, as well.