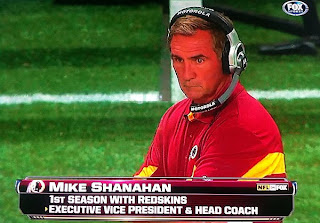 The Washington professional football team lacks many things, and an identity is surely one of them. One might even say it is our chief lack.

Lacking leadership at QB, Coach Shanahan is the current face of this long-suffering organization. In trying to corral this rodeo of powderpuffs and ancient mariners, it is to be expected that his face would get contorted.

But as to Washington's identity, there is only vapor. A Redskins.com article provides some background, but as it moves from the past to the present, suddenly every sentence ends in a question mark.

For a team, "identity" means the factor which unites every individual in a common purpose.

What identity might Shanahan seek to impose? A safe bet would be the formula with which he won two Superbowls. Key to that is the transformation of the O-line into a smaller, faster unit to run the zone blocking. A non-retarded QB would have a good chance of success in such a system.

Considering the ongoing needs for defense, such widespread personnel changes typically take 2-3 years to complete. However, in Denver, Shanahan took over a perpetually underachieving 7-9 team. In his first year, they went 8-8. One year later they 13-3. Denver won its Superbowls in Shanahan's third and fourth year.

Washington's fans are hopeful that the coach can impose such an identity on a similar pace. Hanging over everyone's heads is the default identity of this team: celebratory racism. While it's true that we kicked the crap out of the Indians, there is no reason to be lording it over them still. Unless Shanahan is successful in establishing an identity, this team will be known only for its hard-hearted colonial arrogance.
Posted by Andrew Wice at 12:56 PM