And You Thought Your Favorite Team Had Problems? 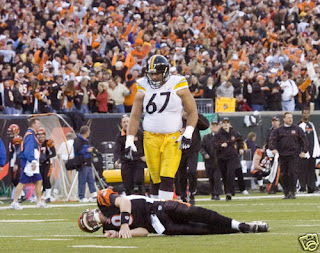 The Bengals football team is humiliation in shoulder pads.

Observe the frantic fight-or-flight instincts of franchise QB Carson Palmer. The former Heisman Trophy winner, selected first overall in 2003, is desperate to get out of Cincinnati. He is insisting on a trade or he will retire.

It's hard to argue with his personal logic: "I have $80 million in the bank. I don't have to play football for money. I'll play it for the love of the game but that would have to be elsewhere. I'm prepared to live my life."

The Bengals response? No trade, because Palmer is crucial to the Bengals' plans. And that's just the problem: the Bengals' plan is to be shitty forever. Remember that Palmer directed their only two winning seasons out of the last twenty years.

Despite some bad injuries over the years, Palmer likely has something left in the tank. Would the Bengals refuse to trade him over spite?

Barry Sanders walked away only 1500 yards from the all-time rushing record, because he refused to play another game for the Lions. If Palmer follows through with his threat, it would be totally hilarious.
Posted by Andrew Wice at 5:29 PM

Email ThisBlogThis!Share to TwitterShare to FacebookShare to Pinterest
Labels: Schadenfreude

I have a hard time believing that even a team as poorly run as the Bengals won't see that Palmer's threats are real, and that's he been a pretty up-and-down QB, and is 31, and trading him for a bag of nice used wrenches is preferable to him retiring.